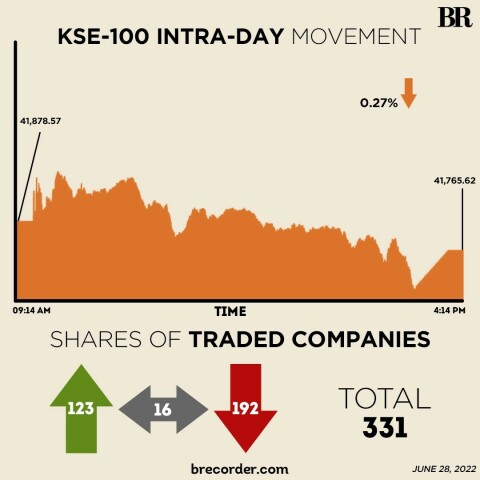 The KSE-100 index inched down 0.27% in a range-bound session on Tuesday as uncertain economic conditions weighed on investor sentiment.

However, to achieve this, Islamabad will have to meet combined targets set forth by the Memorandum of Economic and Financial Policies (MEFP).

On Monday, Prime Minister Shehbaz Sharif had also said Pakistan and the IMF were close to reaching an agreement but noted that the conditionalities “are very tough”.

The market thus expects tough economic measures will be needed to fulfil the lender’s demands and this made the index oscillate between red and green zones throughout the day.

Trading began with a spike and the KSE-100 index remained in the green zone in first half of the session. Investors resorted to book profits towards midday, causing the market to decline.

The market posted a V-shaped trend in the final hour where the index dropped and then rose prior to closing.

Near the end of the session, the State Bank of Pakistan released data that showed the country’s current account deficit clocked in at $1.425 billion in May 2022, compared to $640 million recorded in the same period of the previous year.

Pakistan’s current account deficit clocks in at $1.43bn in May 2022

Topline Securities said tough economic conditions let the market to trade in range bound trajectory where KSE-100 index traded in a range of 535 points as market made an intra-day high of 271 points and low of 264 points.

Chemical, financial, exploration and production and refinery sectors bore the brunt of volatility and closed with modest losses.

Volume on the all-share index rose to 257.2 million from 247.9 million on Monday. The value of shares traded surged to Rs7.7 billion from Rs7.38 billion recorded in the previous session.

Shares of 331 companies were traded on Monday, of which 123 registered an increase, 192 recorded a fall, and 16 remained unchanged.