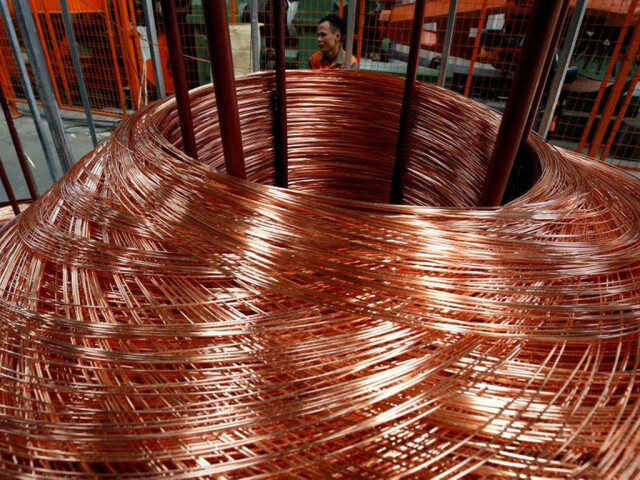 LONDON: Copper prices fell on Friday as worries about demand in top consumer China were reinforced by a stronger dollar.

Benchmark copper on the London Metal Exchange (LME) was down 1% at $7,743 a tonne by 0952 GMT and on course for a fifth consecutive weekly loss.

Prices of the metal used widely in the power and construction industries have dropped nearly 30% since hitting a record high of $10,845 in March.

“COVID outbreaks in China, the dollar and a growth slowdown in the rest of the world will keep base metals under pressure,” one metals trader said, adding that there was little appetite from funds to “go long”, betting on higher prices.

Covid: “Investors remain alert to domestic COVID-19 flare-ups, as the economy is still at an early stage of a bumpy recovery trajectory,” Morgan Stanley analysts said in a note.

China: Weighing on base metals was the Chinese central bank’s biggest cash withdrawal from the financial system in three months, suggesting a gradual exit from crisis-mode monetary easing delivered during coronavirus lockdowns.

Dollar: A higher U.S. currency makes dollar-denominated metals more expensive for holders of other currencies, which would subdue demand. This relationship is used by funds to generate buy and sell signals.

Interest rates: Soaring inflation in the United States and European countries including Britain has prompted central banks to raise interest rates, with further increases forecast. This has led to economic slowdown, prompting some analysts to talk of potential recession.

Inventories: Zinc stocks in LME-registered warehouses are down 60% since end-2021 at 82,875 tonnes. Cancelled warrants – metal earmarked for delivery – at 73% indicate more metal is due to leave the LME system.

Worries over supplies on the LME market have helped the cash zinc to command a premium over the three-month contract for many months now.