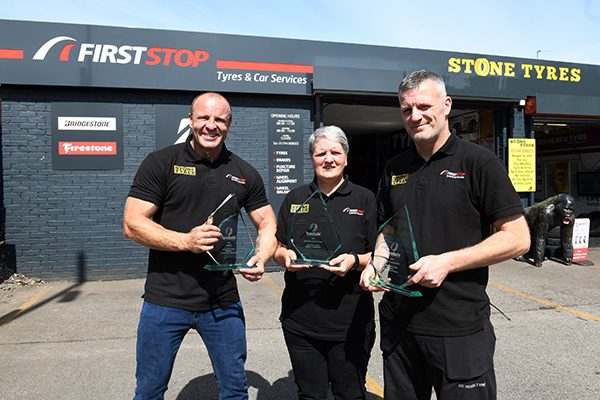 St Helens-based Stone Tyres can lay claim to being the safest garage in the UK after scooping a hat-trick of prestigious industry awards.

The College Street based centre has won three TyreSafe awards for their ongoing work to educate its customers and make surrounding roads as safe as possible.

Owner John Stone was presented with three awards; Online and Social Media, Innovation & Technology and Retailer of the Year, beating scores of other garages across the UK to prevail.

Stone Tyres, which employs five people and has just become a member of the First Stop network to offer even more offers to motorists, is a member of the TyreSafe charity, which campaigns to make roads safer.

TyreSafe Chairman Stuart Jackson said: “Stone Tyres is among TyreSafe’s most active supporters and commit considerable resources to their campaigning efforts. With limited resources at their disposal, it takes passion and commitment for independent retailers and smaller operations to find the time and money to support the tyre safety awareness message, but John and his team have done this to great effect.”

Examples of Stone Tyres’ commitment to safety is an innovative tread scanner ramp, which represented an investment of £26,000. Stone Tyres was the first independent retailer to install such technology in Europe offering 3D tyre tread readings for customers on a plasma screen as they wait in the reception area.

It was also the first independent retailer to offer free puncture repairs for the life of any new tyre purchased one of few tyre dealers to use a Hunter Road Force elite balancing machine, which incorporates a ‘rolling road’ giving the best balance available.

In addition, few garages have done more to eradicate the use of part-worn tyres than Stone Tyres, who haven’t just banned the sale of them from its depot, but had legislation changed across four councils (Liverpool, Wirral, Sefton and St Helens) ensuring that 16,000 private hire vehicle no longer use them.

Owner John Stone said: “Winning one TyreSafe award is something we would have been proud of, but to pick-up three is incredible. It is testament to a great deal of hard work that has taken place over the past 12 months.

“These awards also belong to the team I have. They are the best ambassadors any business could wish for and they communicate the tyre safety message better than anyone.”