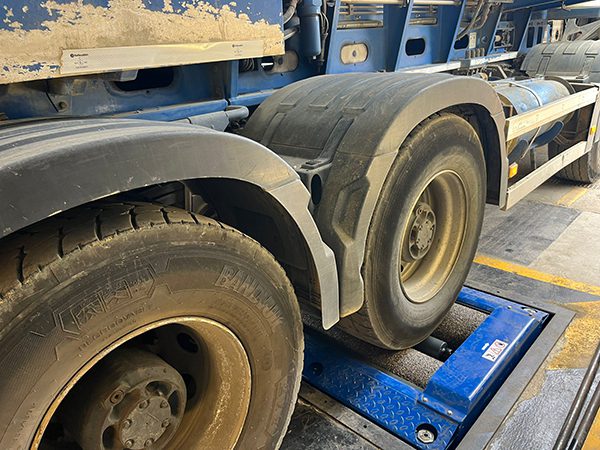 Following the breakdown of its existing commercial brake tester on its ATF lane, Optimus Commercials and Engineering couldn’t afford to wait weeks for a replacement, so when it discovered MAHA UK could deliver one from stock immediately, it was a no-brainer for the company.

Optimus’ manager, Sharron Barrett, picks up the story: “The timescale was the most important thing – we didn’t have time to lose! – so we quickly obtained some quotes, but some lead times were six to eight weeks, and we couldn’t afford to wait that long. Thankfully, MAHA UK had what we needed in stock, so we quickly went ahead with the order.

“Within a couple of days, my staff were able to complete the necessary groundwork, put the frame in and then MAHA’s engineers installed and calibrated the whole system quicky afterwards – from distress call to finished installation, it took a week, which was mighty impressive.”

When the existing rollers “went bang” and Sharron frantically began her quest in finding a replacement, she picked up the phone and utilised her contacts within the trade to find out which brands were trusted – MAHA was one of the names that jumped out quickly.

She explained: “It was over a weekend and a lot of companies were at the same show (Road Transport Expo). In the case of MAHA UK, I received a call back within minutes, a quote within the hour and an engineer came out to see me first-thing on the Monday – that impressed me straightaway.”

How will it change the dynamic of the business?

While the new brake tester won’t increase Optimus’ workload or the number of tests conducted, Sharron identified one key area that will give her and staff peace of mind: “It’s the reliability; hopefully, we’ll have fewer down days and we’ll be able to maximise the brake tester’s capability.

“The aftercare is clearly there – the speed in which quotes and the equipment was delivered was testament to that – and with MAHA UK nearby, we’re comfortable with the new partnership forged.”

Hailed as the ‘workshop platform to build on’, it is depended on in ATF stations across the UK. It has the ability to measure brake system performance quickly and accurately over a long period of time. It also boasts a large roller sensor, with a diameter of 100mm and axle load of 18t, so there is excellent coverage across each tyre’s dimension.

Where this brake tester excels, though, is its ability to include other modules. Users can then watch the MBT 7250 evolve into an all-encompassing workshop platform.

Tachograph calibration, headlight testing, automatic number plate recognition and axle play detection: these can all be managed on EUROSYSTEM, which can be controlled via desktop or a tablet.

Who are Optimus Commercials and Engineering?

Optimus Commercials and Engineering is based in Oakington, Cambridge – just off junction 25 of the A14 – and was founded last June. It took over a previous garage business, saving jobs in the process, and continued the wide range of DVSA MOT testing and vehicle servicing for cars, vans, HGVs and other specialist vehicles. It also helps customers maintain and repair bespoke machinery, like farm equipment.

Sharron revealed: “About 18 months ago, the unit (garage) was handed back to the landowner; however, the landowner also owns a concrete company, possesses a fleet of around 25 lorries and needs somewhere local to maintain them.

“We were then approached about starting up a new garage, which we agreed to so long as it had a new identity and a fresh start – and here we are!”

At present, there is a staff roster of five people, including four mechanics.