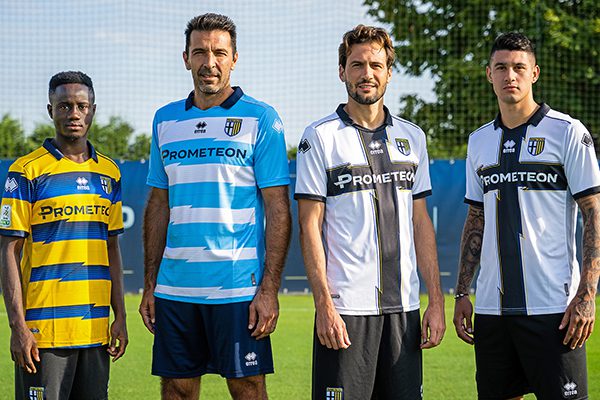 Prometeon Tyre Group is making its debut in the football arena as the main sponsor of Italian professional football club Parma Calcio, with the tyre company’s logo appearing on the first team’s shirts and around the club’s home at Tardini stadium.

The sponsorship agreement between Prometeon and Parma Calcio football club officially kicked off on Friday night (12 August) when Parma drew 2-2 against fellow Italian team Bari as part of the 2022/2023 season of the Serie B Football Championship second division.

The deal will last several years and provides an opportunity to further enhance the visibility of the Prometeon brand, while also supporting one of Italy’s most successful football clubs, which has won three Coppa Italia titles, one Italian Super Cup, one UEFA Cup Winners’ Cup, two UEFA Cups and one UEFA Super Cup over the years. After AC Milan, Juventus and Inter, Parma Calcio is ranked fourth among Italian clubs in the UEFA general ranking for number of titles won.

Commenting on the announcement, Roberto Righi, General Manager of Prometeon Tyre Group, said: “With this agreement, we get involved with a sport that arouses the passions of millions of people worldwide, alongside a prestigious football club that has clear ambitions for the future. We will support Parma Calcio in a growth project that looks to the future and shares our values.”

He continued: “The project is also consistent with the development path that Prometeon Tyre Group is currently undertaking. We firmly believe in this partnership, and we are sure that it will help us to establish an even closer bond with our suppliers and customers, and also with our 8,000 and more employees worldwide.”

The ‘growth’ project led by Kyle Krause, an American entrepreneur and chairman of Parma Calcio since September 2020, will revolve around a team engaged in building its own distinct identity and is unique among its kind, with investments that look to the future. The strategy is in line with the one adopted by Prometeon Tyre Group, which has therefore decided to help the club in its growth path.

The project will also rely on the presence of a highly experienced and popular footballer, captain Gigi Buffon (World Cup winner in 2006 and winner of 10 league titles, who debuted in the first division with Parma back in 1995), and on the insight of the new coach, Fabio Pecchia, who already boasts two promotions to Serie A in his career.

The partnership has several strong points:

STRENGTHENING OF THE BRAND

First of all, it is an opportunity to further strengthen the Prometeon brand. It is not by chance that the initiative takes place in an important year for the Group, during which the new-generation Serie 02 PIRELLI-branded tyres were launched.

Serie 02 represents the most important product launch in Prometeon’s history. To underline the design and production effort and technological innovation involved in the manufacture of these tyres, for the very first time the “Prometeon Engineered” logo appears on the side of the tyres, because Serie 02 is the first generation of tyres developed entirely in the Group’s R&D centres.

Before the Parma Calcio sponsorship, Prometeon Tyre Group also became the Official Sponsor of the World Superbike Championship, with a multi-year agreement (the Prometeon logo will line the race tracks all 12 rounds of the season, which will take place in 10 different countries and have worldwide television coverage). The Group also sponsors a number of top riders, including the current Superbike world champion, Toprak Razgatlioglu, and young talent Axel Bassani.

As already occurs with the Superbike World Championship, Prometeon will initiate these activities with Parma Calcio along with its partners and customers and fleets. The aim is to be part of a major football arena, with key opportunity areas revealing the values and shared ideals of the two brands involved, Prometeon and Parma Calcio 1913: with guided tours, visits to the museum, meet-and-greets with champions, challenges with footballers and the spectacle offered by the Ennio Tardini Stadium experienced from the main grandstand.

Parma boasts a long line of champions who have contributed to its honours. Their engaging stories will arouse the interest of Prometeon collaborators, customers and partners, through events held in various countries, including face-to-face experiences. With regard to the Parma Calcio Academy, both the club and Prometeon will be able to explore new markets in the search for young and talented footballers, as well as new business opportunities.

GT Radial Dealers Take Tyres to the Limit at Portimão