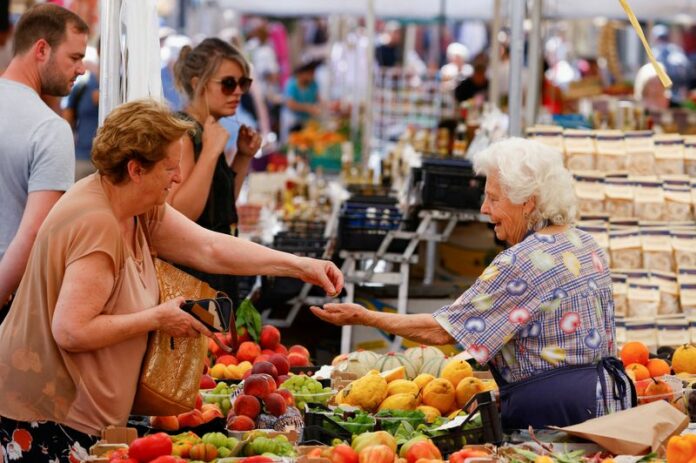 By Giuseppe Fonte and Gavin Jones

ROME (Reuters) -The Italian government said on Thursday it was preparing a new multi-billion euro package to help shield firms and families from surging energy prices, after the country’s main business lobby warned of a looming “economic earthquake”.

Carlo Bonomi, chief of employers’ association Confindustria, said in a radio interview that with energy costs for Italian industry among the highest in Europe, gas prices needed to be capped either at the European or domestic level.

Bonomi said businesses cannot wait for a new government to be installed after elections on Sept. 25 and called for outgoing Prime Minister Mario Draghi to take emergency steps.

“What we are facing is an economic earthquake,” he said.

Foreign Minister Luigi Di Maio told reporters that the cabinet would meet next week to approve “a new decree to curb the increase in energy bills”.

The measures are likely to be worth at least 10 billion euros ($10.01 billion), a government source said. They come on top of some 52 billion euros already budgeted this year to soften the impact of sky-high electricity, gas and petrol costs.

Inflation in Italy, which has the third largest economy in the European Union, jumped to 9.0% in August from 8.4% the month before, driven up by electricity and gas prices, preliminary data showed on Wednesday.

Rival dairy companies Granarolo and Lactalis Italia issued a joint statement on Thursday asking the government to step in to prevent the “disastrous consequences” of rising costs for them and their suppliers.

Bonomi said Draghi should draw up a plan for possible energy rationing and warned 20% of Italian companies may have to halt operations if Russia suspends gas exports to countries opposing it in its ongoing conflict with Ukraine.

Hoping to avoid rationing, the government has said it plans to drop the heating temperature by 1 degree Celsius in public and private residential buildings starting from October, while cutting heating duration by 1 hour a day.

Confcommercio, an association of retail and service firms, issued a similar warning on Wednesday, saying 120,000 Italian service sector companies could go out of business over the next 10 months, with 370,000 job losses.

Manufacturing firms are already struggling and the sector recorded a second straight month of contraction in August, a closely watched survey showed on Thursday.

Confcommercio asked Draghi to extend tax relief to help firms tackle the energy crunch, and to rule that bills can be paid in smaller instalments.

Draghi has financed his anti-inflation packages with increased revenue from value added tax as a result of the higher energy costs and by adjusting other areas of the state budget, without increasing borrowing.

He has so far refused to hike this year’s fiscal deficit above the target of 5.6% of national output that was set in April, despite pressure from several parties for him to do so.

Before finalising next week’s package, the government wants to assess how much it will garner from a 25% windfall tax on energy groups that have benefited from surging oil and gas prices, political sources said.

Under the windfall tax scheme, a 40% down-payment was due by the end of June but thousands of companies refused to pay, leaving the government facing a potential revenue shortfall of more than 9 billion euros.

In response, Draghi said last month the down-payment would carry a 30% surcharge if paid by Aug. 31, after which it would rise to 60%.