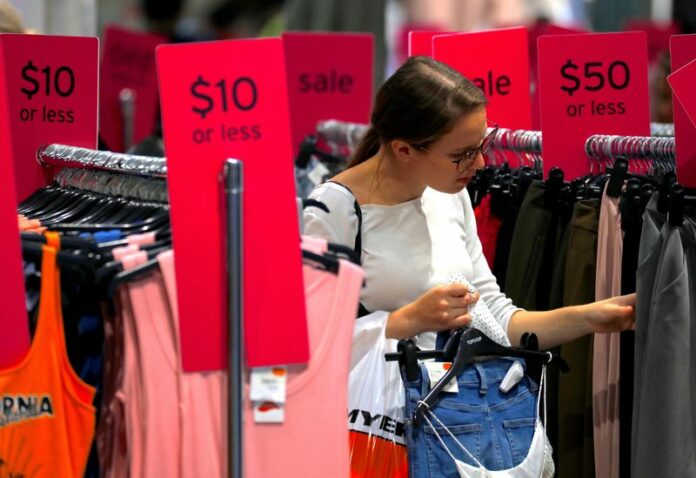 © Reuters. FILE PHOTO: A shopper holds items and looks at others on sale at a clothing retail store in central Sydney, Australia, March 19, 2017. REUTERS/Steven Saphore/File Photo

SYDNEY (Reuters) – A measure of Australian business confidence picked up for a second month in August as sales stayed surprisingly strong in the face of rising interest rates and high inflation, while intense cost pressures also showed some sign of cooling.

Its measure of confidence firmed 2 points to +10, leaving it above the long-run average.

“We continue to expect that inflation and rising interest rates will eventually begin to weigh on household budgets more materially,” he added. “So far, however, it appears this dynamic is yet to take hold.”

Surging inflation has led the Reserve Bank of Australia (RBA) to hike five times since early May, lifting rates by 225 basis points to 2.35% and warning of yet more ahead.

Markets suspect the RBA may slow a little from here and are leaning toward a quarter-point move in October.

NAB survey’s measure of purchase costs did show some easing in August to 4.4%, from a record high of 5.3% in July. Labour cost growth also slowed to 3.5% at a quarterly pace, from 4.5%, while growth in retail prices held at 3.3%.

The survey continued to show resilience in demand, with its measure of sales climbing 4 points to a very strong +30 in August, the highest in more than a year.

Firms were still running flat out with capacity utilisation just off a record high at 86.3%.

Profitability dipped 2 points to a still-firm +16, while the employment index also eased 2 points to +16. Official figures showed the jobless rate fell to a fresh 48-year low of 3.4% in July.

A separate survey of consumers from Westpac showed a bounce in confidence in early September, thanks in part to the strength of the labour market.