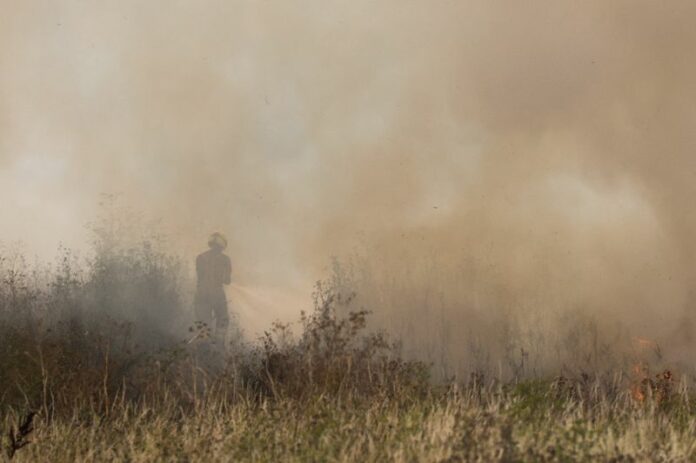 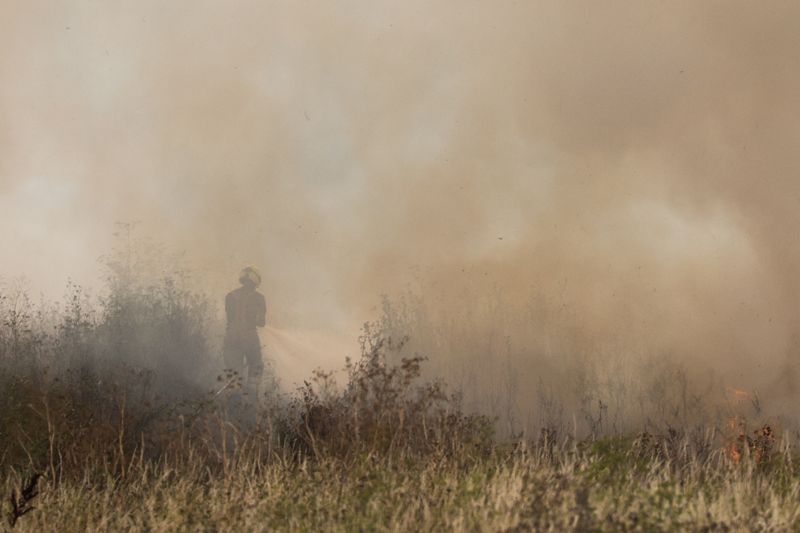 © Reuters. FILE PHOTO: A firefighter works to contain a grass fire during a heatwave in Snodland, near Maidstone, Britain, August 14, 2022. REUTERS/Kevin Coombs

LONDON (Reuters) -The impacts of climate change are “heading into uncharted territories of destruction”, U.N. secretary-general António Guterres warned on Tuesday on the release of a multi-agency scientific report reviewing the latest research on the subject.

The report https://library.wmo.int/index.php?lvl=notice_display&id=22128, led by the World Meteorological Organization (WMO), warns that the world is “going in the wrong direction” on climate change.

With greenhouse gas concentrations continuing to rise in the atmosphere and world leaders failing to adopt strategies to hold global warming below 1.5 degrees Celsius above pre-industrial temperatures, the earth is inching closer to dangerous climate tipping points, the United in Science report says.

“Heatwaves in Europe. Colossal floods in Pakistan…There is nothing natural about the new scale of these disasters,” Guterres said in a video message.

Despite a dip in emissions during coronavirus lockdowns, planet-warming emissions have since soared beyond pre-pandemic levels. Preliminary data reveal that global carbon dioxide emissions in the first half of this year were 1.2% higher than during the same period in 2019, the report finds.

The past seven years were the warmest on record.

The global average temperature has already warmed 1.1 degrees Celsius above the pre-industrial average. And scientists expect the annual average could be anywhere between 1.1C and 1.7C warmer up to 2026 – meaning there’s a chance we could pass the 1.5C warming threshold in the next five years.

By the end of the century, without aggressive climate action, global warming is estimated to reach 2.8C.

But even at the current level of warming we could pass several climate tipping points.

The ocean current that moves heat from the tropics into the northern hemisphere, for example, is now at its slowest in 1,000 years – jeopardizing historic weather patterns, says the report, which includes contributions from the U.N. Environment Programme and U.N. Office for Disaster Risk Reduction.

Nearly half the world’s population is considered highly vulnerable to the impacts of climate change — floods, heat, drought, wildfires, and storms.

By the 2050s, over 1.6 billion city-dwellers will regularly swelter through three-month average temperatures of at least 35C (95F).

To help communities cope, the WMO has promised to put every person on earth under the protection of an early warning system within the next five years.