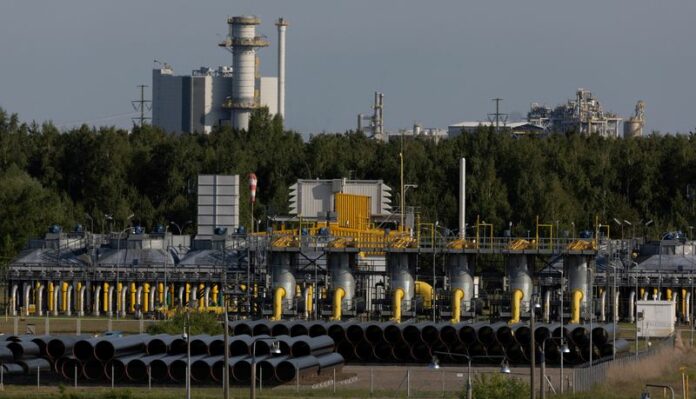 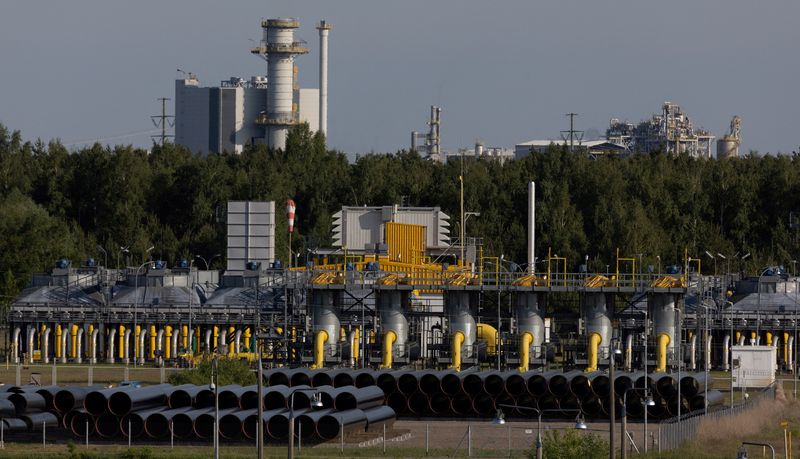 © Reuters. FILE PHOTO: The gas compressor station, a part of Polish section of the Yamal pipeline that links Russia with western Europe which is owned by a joint venture of Gazprom and PGNiG but it is operated by Poland’s state-owned gas transmission company Gaz-Sys

BRUSSELS (Reuters) -The European Union is set to unveil a package of proposed emergency measures this week including a windfall profit levy on energy firms, but countries are split over the details and whether to impose a cap on gas prices.

At a meeting on Friday, EU countries’ energy ministers asked the European Commission to draft measures to skim off excess revenues from non-gas power generators, cut EU-wide electricity use, and help power firms in need of emergency liquidity.

In a bid to pull down soaring energy bills for citizens and businesses ahead of winter, the ministers also asked Brussels to also propose a gas price cap, according to a meeting summary by the Czech Republic which holds the EU’s rotating presidency.

But with European Commission President Ursula von der Leyen due to set out the bloc’s proposals in a speech on Wednesday, countries disagree on whether a gas price cap would ease or exacerbate Europe’s energy crisis, diplomats said.

“On the cost of gas, we continue to work on answers adapted to a global market,” von der Leyen said in a tweet on Saturday.

The proposal should lower prices in Europe “while guaranteeing security of supply”, she added.

Diplomats said more than half of the EU’s member states had made mention of gas price caps in Friday’s meeting – but with little consensus on what form this should take, be it a price cap on all imported gas, pipeline flows, wholesale gas trading, or supplies from Russia.

The EU’s 27 member states will need to approve the energy measures, possibly at another emergency meeting of ministers this month.

Russia supplied around 40% of the EU’s gas before its invasion of Ukraine. That share has plummeted to 9%, as Moscow has cut supplies to Europe, blaming the cuts on technical issues caused by Western sanctions.

EU ministers ultimately backed away from a price cap on Russian gas, which countries including Hungary and Austria had warned could see Moscow cut off the dwindling supplies it still sends to the EU.

Germany, the Netherlands and Denmark are among those opposed to a general gas price cap, warning that it could risk Europe’s winter energy security by leaving countries struggling to attract supplies in the price-competitive global market for liquefied natural gas.

Others, including Italy and Poland, say gas price caps would offer relief to households and industries that have been forced by rocketing gas costs to curb production.