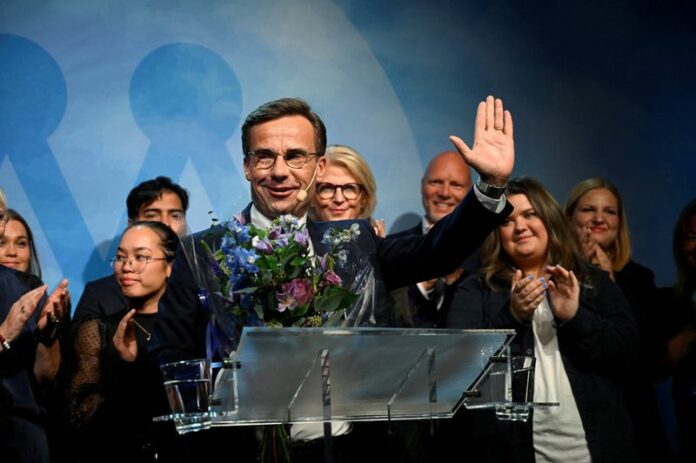 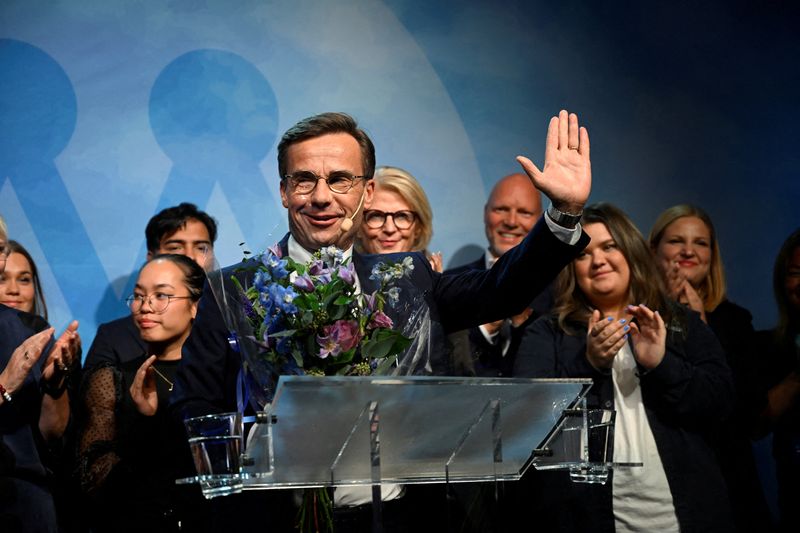 By Johan Ahlander and Niklas Pollard

STOCKHOLM (Reuters) -Sweden’s right bloc appeared in pole position on Monday to form a government for the first time in nearly a decade, helped by a wave of voter anger over gang violence which could give an anti-immigration populist party a share in power for the first time.

Sunday’s national election remained too close to call on Monday with about 5% of electoral districts yet to be counted, but early results gave right-wing parties 175 of the 349 seats in the Riksdag, one more than the left bloc.

Overseas postal ballots were still to be counted and while they have historically tended to favour the right, this means a full preliminary result is not due until Wednesday. All votes are then counted again to provide a final tally.

If the results are confirmed, Sweden, which has long prided itself on being a bastion of tolerance, will become less open to immigrants even as the Russian invasion of Ukraine forces people to flee and climate change is pushing many to leave Africa.

Political observers say Moderate leader Ulf Kristersson is likely to become prime minister in a minority government supported by the anti-immigration Sweden Democrats who are poised to become the largest party on the right and will have a big say on the new administration’s programme.

“The Sweden Democrats have had a fantastic election,” the party’s leader Jimmie Akesson said on Twitter (NYSE:TWTR).

“(We) hope the gap between the blocs remains through the Wednesday count. If so, we are ready to constructively participate in a change of power and a new start for Sweden,” he said.

What’s unlikely to change is Sweden’s path towards NATO membership, which has broad support in the wake of Russia’s actions in Ukraine, as well as the country’s plans to boost defence spending.

Social Democrat Prime Minister Magdalena Andersson, who has yet to concede the election, pledged in March to increase the military budget to 2% of gross domestic product following what Moscow calls its “special operation” in Ukraine.

Preliminary results have shown the Sweden Democrats with 20.6% of the vote, up from 17.5% at the last election.

The party, which has white supremacists among their founders, is expected to stay formally in opposition, with many voters and politicians across the political spectrum uncomfortable with seeing it in government. However, their impact will still be felt.

“It is the Sweden Democrats who have driven the right-wing bloc along, both in terms of shaping the political content and in attracting voters to the constellation,” the independent liberal newspaper Goteborgsposten wrote.

When Kristersson took over as leader of the Moderates in 2017, the Sweden Democrats were shunned by the right and left. But he has gradually deepened cross-party ties since a 2018 election loss and the Sweden Democrats are increasingly seen as part of the mainstream right having moderated some policies such as dropping plans to leave the European Union.

Kristersson will now likely struggle to formulate his economic agenda as inflation runs at a three-decade high and energy costs soar, with the Sweden Democrats opposed to his flagship policy of benefit cuts.

“Intense negotiations are expected and it might take time to form a new government. Fiscal policy will likely remain expansionary regardless of which side wins,” Nordea Markets said in a note to clients.

Campaigning had seen parties battle to be the toughest on gang crime, after a steady rise in shootings that has unnerved voters, while surging inflation and the energy crisis have increasingly taken centre-stage.

While law and order issues are home turf for the right, gathering economic clouds as households and companies face sky-high power prices had been seen boosting Andersson, viewed as a safe pair of hands and more popular than her party.

She was finance minister for many years before becoming Sweden’s first female prime minister a year ago. Kristersson had cast himself as the only candidate who could unite the right and unseat her.

“In a fragmented, multiparty system, finding a stable, governing coalition is becoming increasingly difficult,” said Johannes Berg, research director for politics, democracy and civil society at the Institute for Social Research in Oslo.

“If the result we have now – a one-seat majority for the right – ends up being the final result, that is going to be a huge challenge for the Moderates to hold together.”