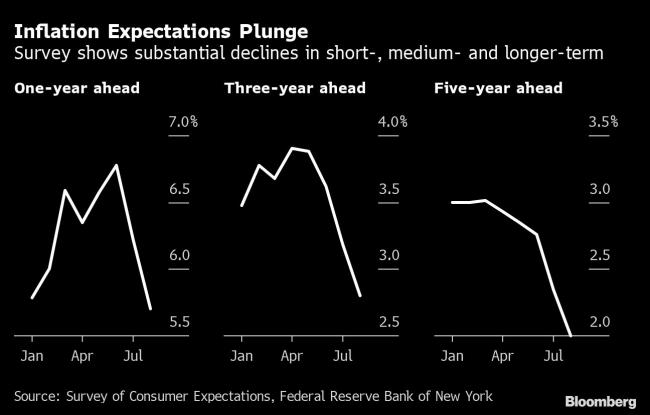 (Bloomberg) — Consumer expectations for US inflation over the coming years declined sharply in the latest survey by the Federal Reserve Bank of New York, providing policy makers with good news as they battle to curb price pressures.

Expectations for US inflation three years ahead fell to 2.8% in August, from 3.2% the previous month and 3.6% in June, according to the New York Fed’s monthly Survey of Consumer Expectations released Monday. The outlook for inflation one year ahead declined to 5.7% from 6.2% in July. On a five-year horizon, consumers now expect 2% inflation, versus 2.3%.

It was the fourth straight monthly decline in three-year ahead inflation expectations, which have fallen from a 4.2% peak in September and October 2021. That coincides with the Fed’s pivot to begin removing pandemic policy support, by signaling it would soon commence scaling back monthly asset purchases. The taper process concluded in March, at which point the Fed raised rates from levels near zero.

US central bankers, who aim for 2% inflation, are increasing interest rates rapidly to curb the hottest inflation in almost 40 years. They are expected to deliver their third consecutive 75 basis-point hike when they meet next week.

US inflation expectations for gas-price increases also continued to ease, with households now expecting them to be roughly unchanged a year from now, the New York Fed survey showed. Expectations about year-ahead price changes for food fell by 0.8 percentage point to 5.8%, and 0.3 percentage point for rent to 9.6%.

Expectations for the housing market, which had been experiencing sharp price increases but has cooled in recent months, also moderated.

“Median home-price expectations declined sharply by 1.4 percentage points to 2.1%, its lowest reading since July 2020,” according to the report. “The decline was broad based across demographic groups and geographic regions. Home-price expectations have now fallen by nearly two-thirds since the April 2022 reading of 6%.”

Consumers were more optimistic about their future household income and financial situations, but these gains fall short of inflation still.

While inflation expectations have declined, the median one-year-ahead expected earnings growth remained unchanged at 3% in August. Respondents also expect household spending growth to be well ahead of income. Spending expectations over the next year increased by 1 percentage point to 7.8% in August.

Consumers expressed optimism in the survey despite higher interest rates. Fewer households expect to be worse off a year from now and the mean perceived probability that U.S. stock prices will be higher 12 months from now increased by 2.1 percentage points to 36.4%.

Still, the survey show the economy is mixed. The perceived probability of missing a minimum debt payment over the next three months increased by 1.4 percentage points to 12.2%, its highest reading since May 2020.

The Fed’s national online poll is based on a rotating sample of about 1,300 households.