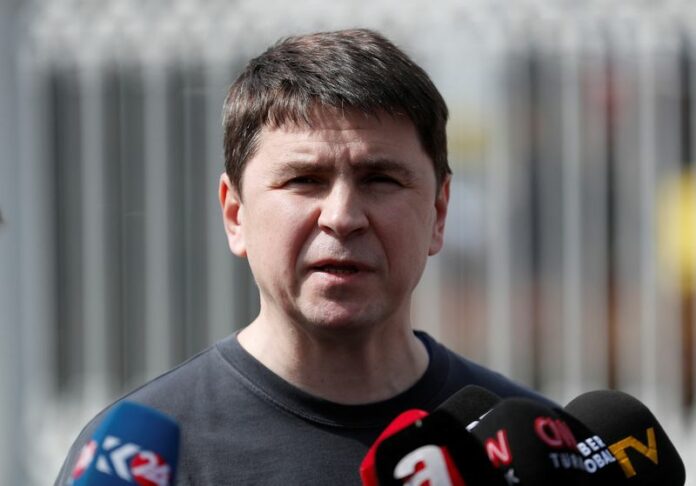 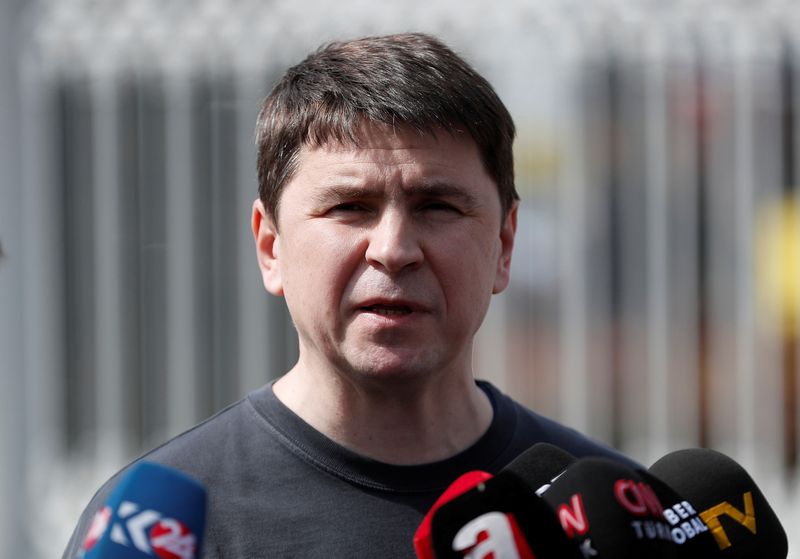 © Reuters. FILE PHOTO – Mykhailo Podolyak, a political adviser to Ukrainian President Volodymyr Zelenskiy, receives questions from a member of the media after a meeting with Russian negotiators in Istanbul, Turkey March 29, 2022. REUTERS/Kemal Aslan

KYIV (Reuters) -Ukraine said on Tuesday it feared Russia would step up attacks on its energy system to turn the screws on Kyiv this winter, and that it was pleading with Western powers for air defence technology to avert this.

“We expect the quantity of such attacks to grow, and are ready for various scenarios,” senior presidential adviser Mykhailo Podolyak told Reuters.

Podolyak added that Ukrainians should be prepared for problems with power and heat this winter. The east European country often sees temperatures as low as -15 degrees Celsius (5 degrees Fahrenheit) in the cold months.

“Ukraine is expecting its difficult winter from the moment it regained its independence (in 1991),” Podolyak told Reuters.

Podolyak said Ukraine had been asking its foreign allies for air defence systems to protect vital infrastructure since the beginning of Moscow’s invasion, but expressed frustration at the lack of supply.

“The ball is in the court of our partners,” he said.

In a comment to Reuters, a spokesperson for Ukraine’s energy ministry said that currently all of Ukraine’s grid was reachable by Russian missiles.

“Until the sky over Ukraine is closed, Russia can unfortunately launch its missiles where it pleases,” the spokesperson said, adding: “Our task is to quickly repair everything.”

The recent attacks are another blow to Ukraine’s energy security, after it recently had to switch off the last operating reactor at its largest nuclear plant due to persistent shelling cutting off power lines. The plant has been occupied by Russian troops since March.

Podolyak said another coal power plant that also heats water for homes was hit on the outskirts of Kharkiv on Sunday.

Galushchenko said the attacks left hundreds of thousands of people across five regions without power, but that all major lines were restored within 4-1/2 hours.

“What is happening now, the substitutions and reserve schemes would not be possible in most European countries,” he said.

However, the task remains daunting: As well as its vast arsenal of missiles, Russia is aided by its detailed knowledge of Ukraine’s power grid, much of which was laid out in the Soviet era when Kyiv was ruled from Moscow.

“The (Russians) know the topology of Ukraine’s energy system, this is no secret,” Kharchenko said, but said that even so, Moscow would only be able to cut off power on a regional, rather than national, level.

“If they choose a small part of Ukraine, and deliberately destroy the infrastructure there, then they can leave a city without electricity for (several) days,” he said.