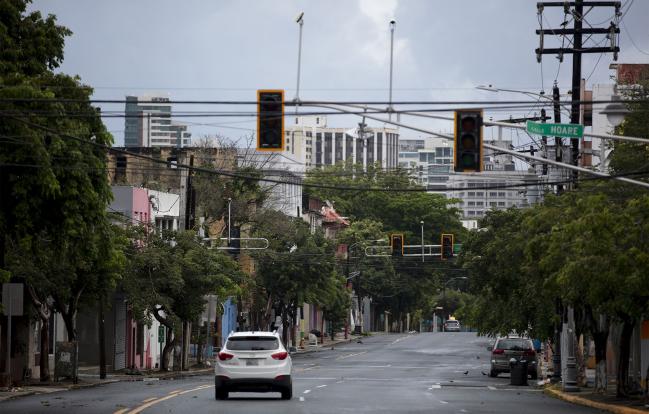 (Bloomberg) — When Hurricane Fiona lashed Puerto Rico Sunday, it washed out bridges and roads, ripped off roofs and sent more than 1,300 people scurrying to emergency shelters. It also laid bare, once again, just how sickly the island’s power infrastructure is.

Even before the storm touched land on the southwestern tip of the island, it had provoked a general blackout that affected the entire US territory of 3.1 million people. Luma Energy said that it restored power to over 100,000 people. The company has 1.5 million customers.

The power outages hit as Puerto Rico’s Electric Power Authority, known as Prepa, is dealing with a bankruptcy with no clear end in sight. Court ordered mediation to reduce the $9 billion debt the company owes broke down on Friday — just hours before Fiona hit — opening the door to prolonged and costly litigation with bondholders.

For many, the outage is a reminder of the dark days after Hurricane Maria slammed into Puerto Rico as a Category 4 storm in 2017. Maria claimed almost 3,000 lives, destroyed the electrical grid and left vast swathes of the island in the dark. It took almost a year to completely restore power.

Yajaira Vargas, 56, was selling tripe and chicken soup out of the back of her car in the Barrio Obrero neighborhood of San Juan on Monday morning, as Fiona was still dumping rain on the capital. After Hurricane Maria, she was left without power for more than a month. While Fiona was mild by comparison, Vargas has little faith her electricity will be restored quickly.

“I’m not going home until I sell all of this, because it has to be refrigerated and I’m not going to let it go bad,” she said, as she ladled soup from a cooler. “You never know when the lights are going to come on.”

Since Maria hit, the federal government directed $9.5 billion to repair the system, and the island put the management of electricity transmission and distribution into private hands.

And yet problems persist. The island still has some of the most expensive and least reliable energy of any US jurisdiction. And blackouts are common, even without storms. On a clear, windless day in April, a fire at an aging substation sparked an island-wide outage that took days to recover from.

And federally funded projects, while vital and massive, are moving at a glacial pace. Of the billions allocated for the electrical grid, only about $40 million has been disbursed, according to FEMA Associate Administrator Anne Bink.

The slow pace is not limited to the island’s power authorities. Of the $21 billion that FEMA has designated for public assistance projects overall in Puerto Rico, only 2% has been spent, said Chris Currie, a director in the Government Accountability Office’s Homeland Security and Justice Team.

Speaking to Congress last week, Currie said a lack of trained staff and Puerto Rico government’s not matching funds were slowing down the flow of federal aid.

“These federal dollars are not just critical for rebuilding damaged projects,” he said. “This is critical for the economy of Puerto Rico for the years to come. It’s a huge part of their expected GDP and I think it’s very important that we continue to monitor them.”

Much will be riding on the performance of Luma, the private consortium of Atco Ltd. and Quanta Services Inc (NYSE:PWR)., working with Innovative Emergency Management Inc. The company snagged the estimated $1.5 billion, 15-year contract in June last year with the promise that it would be able to unlock federal funding and speed the recovery.

But 15 months into the deal resentment is growing. A recent report by the Center for a New Economy, a local think tank, argued that Luma has not improved service or reduced costs since taking over. Continued blackouts have sparked mass protests from unhappy customers. Global popstar Bad Bunny routinely skewers Luma during his sold out concerts. A powerful faction of Puerto Rico’s legislature — including House Speaker Rafael Hernandez — is now actively trying to rescind the contract.

Luma denies it’s falling down on the job and has blamed most of its problems on its predecessor, Prepa, which still controls power generation.

“The transmission and distribution system that Luma inherited was weakened by years, if not decades, of poor design, little to no maintenance, lack of proper inspection and other profound failures that continue to impact the overall stability and reliability of the system,” Luma Senior Vice President for Engineering Shay Bahramirad told US congress last week.

Crews were scrambling on Monday to restore power in the wake of Fiona — particularly to hospitals, clinics and other crucial infrastructure. But even before the damage could be fully assessed, Luma Energy was warning that it could take “several days” to fully restore power.

The power woes are more than just a nuisance, they’re an existential threat to the island’s economy, says Yandia Perez, the executive vice president of the Puerto Rico Manufacturers’ Association.

“With expensive, inefficient and dirty energy we cannot promote industry or even talk about sustainable economic development on the island,” she said.

The lack of reliable energy and a sluggish economy have led to a historic population outflow. From 2010 to 2020, the island lost 12% of its population — most moving to the US mainland.

Puerto Rico “has a once in a generation opportunity to rebuild its grid and to make it more resilient using federal funds as a result of FEMA aid from Hurricane Maria,” Ceffalio said. “It’s crucial for the future of the island that they take advantage of that soon and rebuild a modern electric distribution system.”