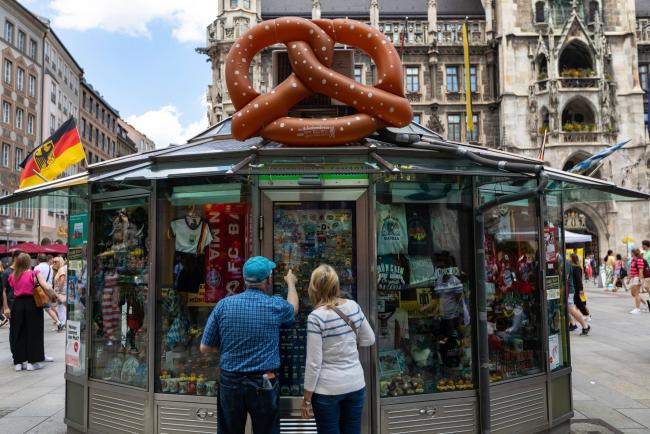 Bundesbank Says There Are Mounting Signs of Recession in Germany

&copy Bloomberg. Customers look at Germany and Munich themed stickers, badges and other mementos at a souvenir kiosk in Munich, Germany, on Saturday, June 11, 2022. Confidence in the German economy improved a little, while remaining depressed, as fewer investors predict the outlook will deteriorate further in the face of record inflation and the war in Ukraine.

(Bloomberg) — Hints of a recession in Europe’s largest economy are becoming more evident after a significant deterioration in supply conditions, the Bundesbank said.

Throttled energy shipments in particular as a direct consequence of Russia’s war in Ukraine are leading to soaring prices and mounting uncertainty in Germany affecting both companies and households, the central bank said in a monthly report on Monday.

While accumulated gas supplies will probably help to avoid formal energy rationing in the winter, economic output is likely to decline “somewhat” in the third quarter before a “noticeable” contraction in the following two, the Bundesbank said.

“There are increasing signs of a recession of the German economy in the sense of a clear, broad-based and longer-lasting decline in economic output,” it said.

The country will probably be able to avoid the dire situation outlined in an adverse scenario in the institution’s June projections, which foresaw an overall decline of 3.2% over the course of 2023, yet the outlook is still “extremely uncertain.”

Inflation rates are also set to rise further in the coming months after certain government support measures to lower fuel and public-transport costs expired at the end of August. Headline inflation could even enter a double-digit range, the Bundesbank said.