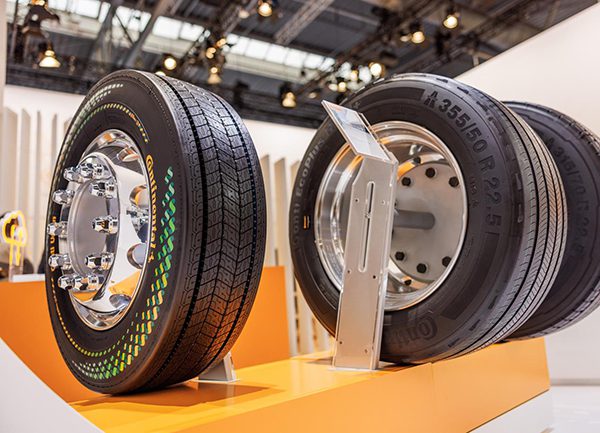 At the IAA Transportation 2022 in Hanover, Continental showcases a range of highly innovative tyre solutions aimed at improving the sustainability of passenger and goods transport over short and long distances. With the Conti Urban, for example, the tyre manufacturer premieres a concept tyre specially designed for the electrified bus and delivery traffic of the future. The share of renewable and recycled materials in this prototype, which is already approved for road use and could soon enter a testing phase with customers, is almost 50 percent. After just one retread, this figure increases to more than 90 percent.

The concept tyre has also been specially noise-level-optimised. Continental is convinced that greater sustainability is essential in the urban passenger and goods traffic sector. Due in particular to the ongoing increase in demand for urban passenger and goods transport, the number of electrified city buses being registered is also rising. According to the European Automobile Manufacturers’ Association (ACEA), the number of new registrations for electric buses within the European Union continued to increase significantly in 2021, with their market share rising that year to 10.6 percent. In the same period, electric buses already accounted for more than 30 percent of new bus registrations in the European Union. Market studies predict annual growth rates of up to 35 percent from 2021 through to 2025.

The tyre manufacturer also premieres a new tyre prototype specially designed for a new trailer concept, featuring a fully electric drive axle. Continental is the exclusive development partner for this innovative trailer from Trailer Dynamics, which is designed to hybridize truck tractor units by means of a battery-powered trailer and so reduces their CO2 emissions.

With the EfficientPro Gen 3+, the premium tyre manufacturer presents an upgrade to its EfficientPro long-distance tyre, which is well known in the original equipment business for trucks. Its rolling resistance has been specially optimised, making it very energy efficient.

At the trade show, Continental is also demonstrating its digital tyre management system ContiConnect 2.0, which enables fleet managers to permanently monitor the condition of tyres and so save fuel and reduce CO2 emissions. Tyre monitoring also helps to prevent premature tyre changes and unscheduled downtime.

“At the IAA Transportation 2022, we will be showing how we are contributing to greater sustainability in short and long-distance traffic thanks to our range of commercial vehicle tyres. Continental is integral to the efficient and sustainable transportation of the future,” says Klaus Kreipe, who heads up Continental Tyres’ original equipment business in Europe, the Middle East and Africa (EMEA).

Continental’s sustainable concept tyre Conti Urban, which is designed for electrified city buses and delivery vehicles in urban environments, is celebrating its world premiere at the IAA Transportation 2022. Already approved for road use, this concept tyre contains around 50 percent renewable and recycled materials. All the materials used could potentially be deployed in series production in the near future. The tread of the Conti Urban – the part of the tyre that is in contact with the road – contains 68 percent renewable materials, including rapeseed oil, silica obtained from the ash of rice husks and responsibly sourced natural rubber originating from a joint development project by Continental and the German development aid agency ‘Deutsche Gesellschaft für internationale Zusammenarbeit’ (GIZ). Cutting-edge digital technology, local involvement in the cultivation of rubber and close collaboration with strong partners creates transparency and ensures a high level of traceability along the entire value chain for natural rubber. All natural rubber used in the tread originates from this project. In addition to recovered carbon black and recycled steel, Continental has also used reclaimed material to build the tyre. This recycled rubber originates primarily from Continental’s innovative retreading and recycling plant for truck tyres in Hanover, Germany.

Like the majority of Continental’s commercial vehicle tyres, the Conti Urban can also be retreaded, a process that breathes new life into worn but intact tyre casing by replacing the old tread with a new one. The continued use of the casing, which contains an especially high share of all the materials used in a tyre, pays off: “Our Conti Urban increases its sustainability even more when its service life is extended. Once the tyre is retreaded, so when the casing receives a brand-new tread, the share of renewable and recycled materials rises to more than 90 percent,” says Kreipe. “By 2050, we want to use 100 percent sustainably produced materials in all our tyre products and achieve full climate-neutrality along our entire value chain.”

When designing the tyre, Continental’s tyre developers focused their efforts on achieving high energy efficiency and optimising noise emissions. A special rubber compound in the tread, the wider tyre tread, and the specially optimised and exceptionally rigid profile, help to reduce rolling resistance by seven percent compared with a current-generation Conti Urban and increases tyre life. As always with Continental, all without any compromise on the safety-relevant performance properties.

The noise behaviour of the Conti Urban was also specially optimised. Noise frequencies generated while the tyre is rolling over the road surface have been distributed over a wider range. As a result, the broader spectrum of different frequency ranges ensures that the perceived noise level is lower. The background to this is that sounds with a monotonous frequency are particularly unpleasant to the human ear. The generation of different frequencies at the same volume, on the other hand, helps to improve the individual’s perception of noise. In this way, Continental wants to make a contribution to further reducing noise pollution from urban bus and delivery traffic in the future.

Continental premiers tyre for trailer with an electrified drive axle

Another highlight that Continental will be unveiling at the IAA Transportation 2022 is a tyre prototype for a special trailer with an electrified drive axle. Continental is the exclusive development partner to Trailer Dynamics, which will be presenting this innovative concept featuring an electrified semitrailer to the public at the show.

The tread profile on this prototype is exceptionally robust and features deep traction elements such as sipes for high performance throughout the tyre’s lifetime. In addition, a special tread compound ensures a good balance between traction and mileage. The final serial production tyre will also have a reinforced belt package to counter the impact of propulsion of the driven axle.

“Our tyre prototype for electric trailers represents a whole new tyre segment. It possesses the properties of a tyre for the drive axle and is designed for the recuperation of braking energy. It also possesses all the properties of a conventional trailer tyre for the first and third axle. A real all-rounder in the truest sense of the word, it is specially designed for the hybridisation of trucks,” says Kreipe.

The prototype, which is based on the Conti EcoPlus HT3 + in size 355/50 R 22.5, is already approved for road use and is currently being tested in collaboration with Trailer Dynamics. Series production is scheduled to begin in 2025. The electrified drive axle of the eMega Liner from Trailer Dynamics instantly transforms the semitrailer tractor with combustion engine into a hybrid vehicle, meaning that the electrified trailer significantly reduces diesel consumption and CO2 emissions – by at least 20 percent according to the manufacturer.

The Conti EfficientPro Gen 3+ is Continental’s new and improved version of its long-distance tyre, which is well known in the original equipment business for trucks. The focus of further development was on minimising rolling resistance and, in turn, the fuel consumption and CO2 emissions generated during freight transport. Compared with its predecessor model, the declared rolling resistance of the Conti EfficientPro Gen 3+ for the steering and drive axle in size 315/70 R 22.5 is around nine percent lower. In size 385/55 R 22.5, which is designed for the steering axle, the tyre has around seven percent less rolling resistance compared to the declared value of its predecessor. These improvements were achieved thanks to new rubber compounds for tyre components, such as the treads and by modifying the belt to reduce deformation in the area of the tread contact and, in turn, rolling resistance.

“We have upgraded the Conti EfficientPro Gen3+ in specific ways so that our customers can further reduce the fuel consumption and, in turn, CO2 emissions of their fleets,” says Kreipe.

Internal VECTO calculations – a standardised method for calculating vehicle energy consumption – revealed that in a medium-sized fleet comprising of 500 vehicle units, each covering an average of 120,000 kilometres per year, the Conti EfficientPro Gen3+ could save up to 465 metric tons of CO2 emissions and cut fuel costs by around £263,000 annually compared with its predecessor.

With ContiConnect 2.0, Continental also showcases the latest generation of its comprehensive tyre management system at the IAA Transportation 2022. Thanks to continuous digital condition monitoring, the system ensures that tyres always perform at their best. This saves fuel, cuts CO2 emissions and prevents unscheduled tyre changes and workshop visits, avoiding all the costly vehicle downtime that these entail. Customers who implement ContiConnect 2.0 benefit from a more efficient fleet, reduced costs and significant time savings because tyre maintenance can be planned well in advance and performed as and when needed. In addition to monitoring tyre pressure and temperature in real time, fleet managers will also be able to monitor the mileage, tread depth and, in turn, the overall condition of each individual tyre in their fleet. With ContiConnect 2.0, Continental offers its customers a range of tailored solutions that make fleet management even more efficient, simple and sustainable.

At the heart of ContiConnect’s functionality is the tyre sensor – and at the trade show, the premium tyre manufacturer will be showcasing its latest-generation sensor, which is capable of measuring pressure, temperature and mileage from inside the tyre. Depending on the application, it transfers data over a specific radio frequency or via the Bluetooth protocol. Continental’s specially developed app, which is available for all standard smartphone operating systems, also enables data-driven tyre inspections and allows data to be read on-site.

Continental’s booth (C29) at the IAA Transportation 2022 is located in Hall H12.