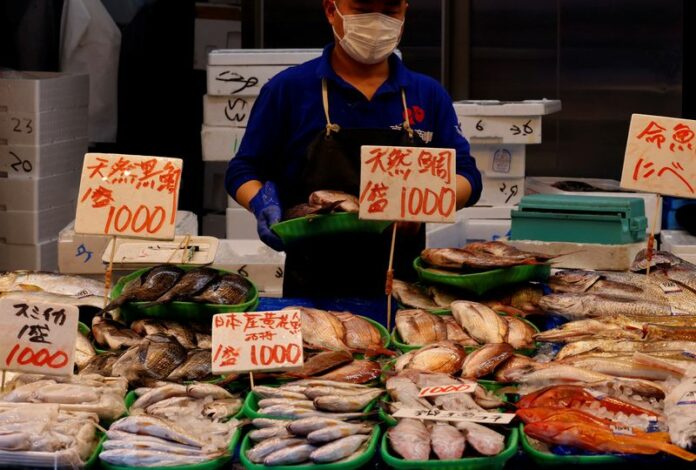 © Reuters. FILE PHOTO: A vendor sells fishes at a shop at the Ameyoko shopping district in Tokyo, Japan, May 20, 2022. REUTERS/Kim Kyung-Hoon/File Photo

TOKYO (Reuters) -Japan’s ruling party is ramping up calls for a fresh spending package worth at least $105 billion to cushion the blow from rising inflation, reinforcing fears that the world’s third largest economy will lag others in pruning huge fiscal support.

“We need a large-scale, comprehensive package,” Motegi, the sectretary-general of the Liberal Democratic Party (LDP), said on Tuesday, regarding a spending package the government is due to compile next month.

But another senior LDP official, Hiroshige Seko, estimated at least double that, or 30 trillion yen, was needed, he told a separate news conference, Kyodo added.

Prime Minister Fumio Kishida, who has seen public support for his cabinet slump in recent weeks, faces pressure from his ruling coalition for fresh measures to prop up his ratings and a fragile economy.

To fund the spending, the government is likely to submit a supplementary budget next month to parliament.

Just as Japan’s economy recovers from wounds inflicted by the COVID-19 pandemic, it finds itself battling rising commodity prices and slowing global growth.

The Bank of Japan has pledged to retain ultra-low interest rates to support the economy. But its dovish policy stance has driven the yen currency to 24-year lows, pushing up food and fuel import costs, to put more strain on homes and firms.

Natsuo Yamaguchi, head of the LDP’s coalition partner Komeito, said policymakers must watch the impact rapid moves in the yen could have on livelihoods.

“The yen is weakening much faster than before, which is said to be driven by the interest rate policies of Japan and the United States,” Yamaguchi told a briefing.

Japan’s core consumer inflation quickened in August to 2.8%, its fastest annual pace in nearly eight years, and exceeding the central bank’s target of 2% for a fifth straight month as prices of raw materials grew, along with the yen weakness.

The BOJ is set to keep ultra-low rates and its dovish stance at a two-day meeting that ends on Thursday, just hours after a big rate hike expected by its U.S. counterpart, possibly triggering a fresh bout of yen selling.