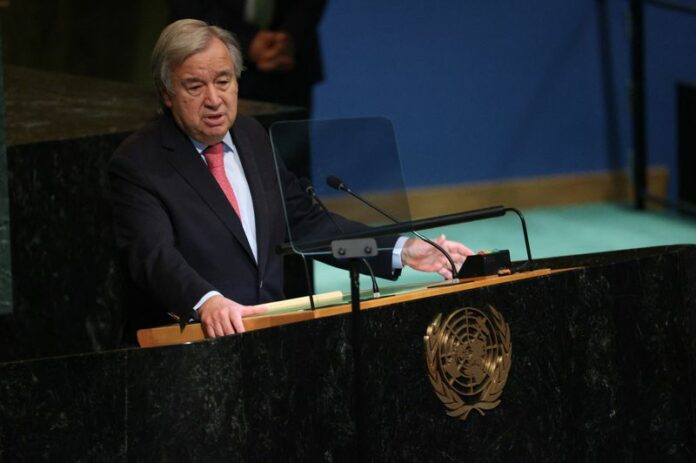 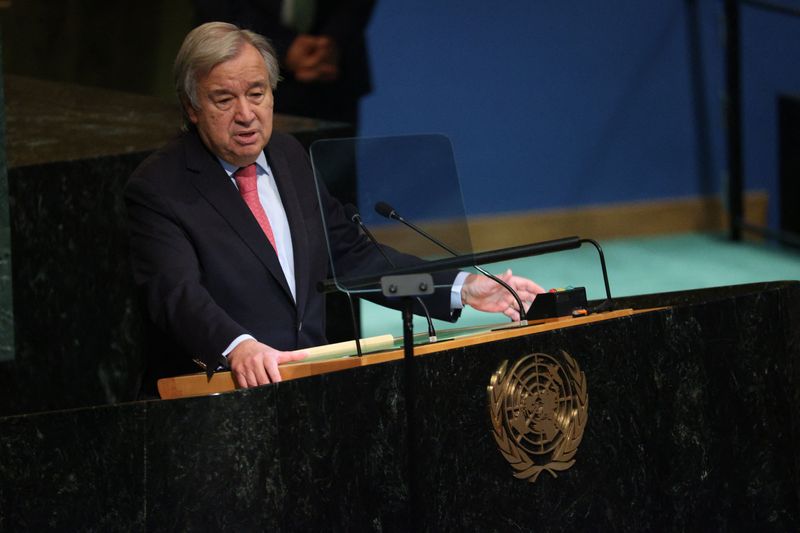 UNITED NATIONS (Reuters) -U.N. chief Antonio Guterres on Tuesday urged rich countries to tax windfall profits of fossil fuel companies and use that money to help countries harmed by the climate crisis and people who are struggling with rising food and energy prices.

Addressing world leaders at the 193-member U.N. General Assembly, the climate activist secretary-general stepped up his attacks on oil and gas companies, which have seen their profits explode by tens of billions of dollars this year.

“The fossil fuel industry is feasting on hundreds of billions of dollars in subsidies and windfall profits while household budgets shrink and our planet burns,” he said.

“Polluters must pay,” he added.

While Guterres again pushed developed countries to tax the fossil fuel windfall profits, this time he also used his platform to spell out where the money should be spent.

“Those funds should be redirected in two ways: to countries suffering loss and damage caused by the climate crisis; and to people struggling with rising food and energy prices,” he told the annual gathering of world leaders in New York.

Britain has passed a 25% windfall tax on oil and gas producers in the North Sea, while the European Union plans to raise more than 140 billion euros to shield consumers from soaring energy prices by taxing windfall profits from oil companies and electric generators. U.S. Democratic lawmakers have discussed a similar idea, though it faces long odds in a divided Congress.

While these plans focus on redirecting windfall profits to domestic consumers, the secretary general advocated for a tax that would be directed to the world’s most climate vulnerable countries, which have been embracing the idea.

He also said multilateral development banks “must step up and deliver” and that helping poor countries adapt to worsening climate shocks “must make up half of all climate finance.”

Guterres added: “Major economies are their shareholders and must make it happen.”

The secretary general also broadened his criticism of oil and gas companies to enabling industries that he said helps keep carbon pollution growing, such as banks and other financial institutions that invest in those companies and the public relations and advertising industries.

“Just as they did for the tobacco industry decades before, lobbyists and spin doctors have spewed harmful misinformation,” Guterres said. “Fossil fuel interests need to spend less time averting a PR disaster – and more time averting a planetary one.”