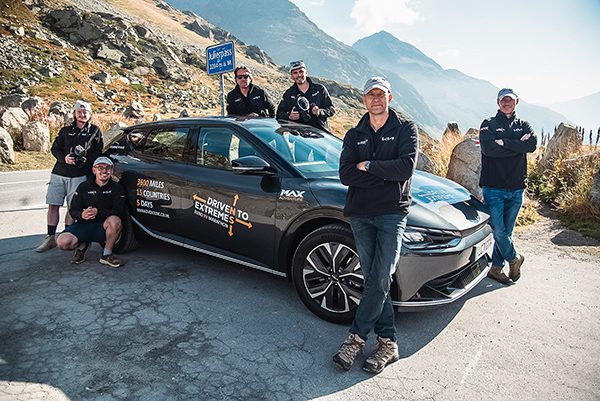 Taking the car from Oslo, Norway, to Portugal, the team knocked 47 minutes off the time set by racing legend Sir Stirling Moss, who undertook the drive in 1952, and was able to add an extra country to the list of those visited.

Designed to show how easy it is to cover huge distances in a short time using a standard EV and existing charging infrastructure, the team relied on Kumho’s patented tyre technology to cross the finish line and mark World EV Day on September 9th. Kumho’s ECSTA PS71 EV tyre is original fit on the Kia EV6, with 235/55R19 sized examples used by the challenge car throughout the trial.

Kumho’s ECSTA tyre is notable for its minimal level of resonance noise, thanks to Kumho’s patented sound absorbing technology – dubbed K-Silent. This optimises the shape and properties of polyurethane foam materials placed within the tyre. This results in a marked reduction in the air vibration generated during contact with the road surface.

Kumho developed the K-Silent system back in 2014 and now holds patents for the unique design throughout the world. Other properties of PS71 EV that make it ideal for tyres intended for use on electric vehicles include low rolling resistance, strong anti-wear performance and excellent levels of grip.

Inspired by an endurance test completed by Sir Stirling Moss 70 years ago, the ‘Driven to Extremes Euro EV Marathon’ is understood to be the first time the route has been attempted in a fully electric vehicle as a continuous trip. With the support of Kumho Tyre, as well as Kia UK, the team departed on Sunday, 4th September at 15:00 and crossed the border into Portugal, at Vilar Formoso on Thursday, 8th September at 08:12. This marked the start and stop points for the timing – as per the original drive in 1952.

The team of three in the Kia EV6 worked to a strict rota, taking turns behind the wheel and then navigating, while the third rested. The only stops were made for driver swaps, refreshments and vehicle charging.

Speaking of the Kumho ECSTA and its role in the drive, Project Leader Mac Mackenney said: “Ensuring that the team member on a rest cycle was able to sleep was vital to the safety of this project and, while an EV produces less vibration and noise than an ICE vehicle, road noise can be a problem. The team found that the Kia EV6 with the original fit ECSTA EV tyre delivered a pliant and quiet ride right across Europe. If it hadn’t gone smoothly, we couldn’t have bettered Sir Stirling’s time.”

Speaking of the successful challenge, Kumho Tyre (UK)’s Managing Director Keon Park said: “Many congratulations to the Max Adventure team on achieving their aim and for beating their target time in the process. It was an amazing feat with which Kumho was delighted to be involved.”

The ‘Driven to Extremes Euro EV Marathon’ was inspired by the adventure undertaken by Stirling Moss in 1952. A publicity stunt to promote the then-new Humber Super Snipe 4-door saloon, the legendary racing driver, along with three of his ‘fast friends’, were challenged to visit 15 European countries in less than five days.

2022’s challenge gave that journey a modern perspective, and concluded on World EV Day, September 9th. Travelling from Oslo to Lisbon, driving roughly 200–mile legs at a time, and using Europe’s public charging network throughout, the challenge used one of the most accomplished electric vehicles available today.

With a WLTP combined range of up to 328 miles on a single charge, the Kia EV6 ‘Air’ was the perfect car for the Driven To Extremes team to tackle the 3,174-mile marathon. With its spacious cabin and long wheelbase, the car provided comfort during this 89-hour drive, while its 800V ultra-rapid charging technology kept pit stops to a minimum. Capable of taking the battery from 10 to 80 per cent in just 18 minutes when using a 350kW charger, or from 10 to 80 per cent in 1 hour 13 minutes using a 50kW charger, the Kia EV6 allowed the team to pick optimal stopping points along the way.

To ensure the team had the best possible chance of completing the challenge in time it also used ‘Kia Charge’. Providing easy access to chargers across all parts of the UK, Northern Ireland and Europe, ‘Kia Charge’ lets owners choose from 23 charge point operators in the UK via a single account, and dozens more across Europe. ‘Kia Charge’ provides instant access to more than 21,000 connectors across the UK – equivalent to approximately 70% of the national public infrastructure – and more than 400,000 across 29 European countries, all from a single account.

From its departure point at Kia’s Norwegian headquarters in Lørenskog on the outskirts of Oslo, the team of drivers used main roads and bridges to cover the 3,174 miles and the adventure was tracked at all times by a GPS system. The route trace is available via partner YB Tracking: https://yb.tl/evmarathon. The team of three took turns behind the wheel of the EV6, driving, resting and navigating – with stops made for driver swaps, team rest and vehicle charging. A support vehicle, also supplied by Kia, accompanied the EV6 to document the drive, carrying a photography and film crew.