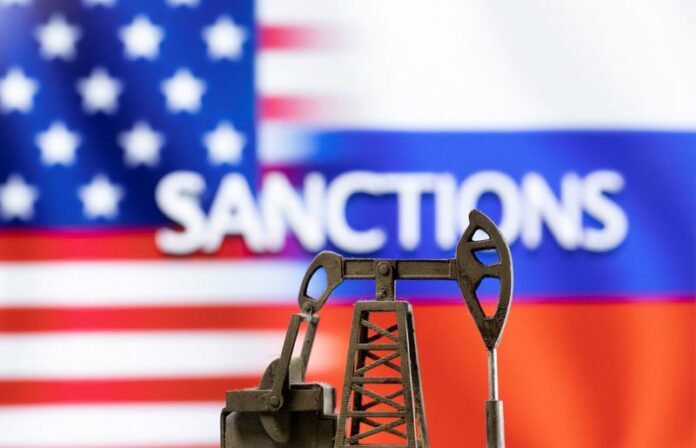 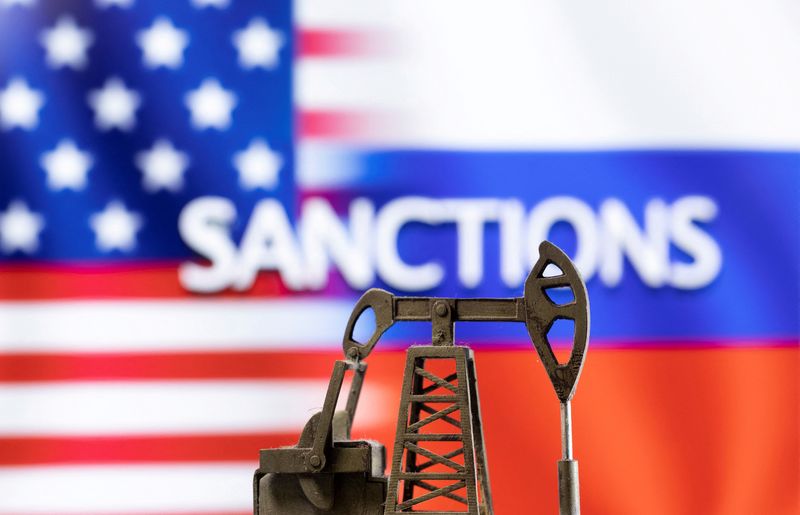 © Reuters. FILE PHOTO: A model of a pump jack is seen in front of the displayed word “Sanctions”, U.S. and Russia flag colours in this illustration taken March 8, 2022. REUTERS/Dado Ruvic/Illustration/File Photo

Both senators are members of the Senate Banking Committee, which oversees sanctions policy.

They said the ability to target banks would make it harder for Russia to evade the price cap through deals with countries not formally participating in the G7 scheme.

“If you want to set a worldwide price cap on Russian oil, you need to ensure that it’s uniformly applied. And to do that, we believe you need the backup of the secondary sanctions,” van Hollen said on a call with reporters after a Banking committee hearing on Russia sanctions.

“I think the president needs new authority from Congress to enforce the price caps on anyone who buys oil from Russia at a price above the cap that’s been set or in significantly increased volumes,” Toomey said on the call.

The Biden administration has been reluctant to impose secondary sanctions, concerned they could complicate relations with importers of Russia oil like China and India.

The U.S. Treasury has said that anyone who falsifies documentation or otherwise hides the origin or price of Russian oil would face consequences under the domestic law of jurisdictions implementing the price cap.

The Group of Seven announced the price cap plan this month to limit Russia’s lucrative oil export revenue in the wake of the invasion. Several countries have banned imports of Russian crude and fuel, but Moscow has managed to maintain its revenues through increased crude sales to Asia.

“The price cap we believe will have a powerful effect in doing several things, certainly in the first instance denying Russia’s revenue to fund its war,” Rosenberg said. “And secondly, by keeping Russian oil in the market at lower prices, it will reduce the potential for price spikes in the market.”

Also at the hearing, Democratic Senator Kyrsten Sinema asked Rosenberg what Washington can do to address the blending of Russian oil by the country’s producers with crude from other nations to circumvent sanctions.

Rosenberg indicated that Treasury will in coming weeks release guidelines to address the issue.

“We have an opportunity to offer further clarity and guidance on this important point in the forthcoming guidance and frequently asked questions that the U.S. government will put out in the coming weeks,” she said.