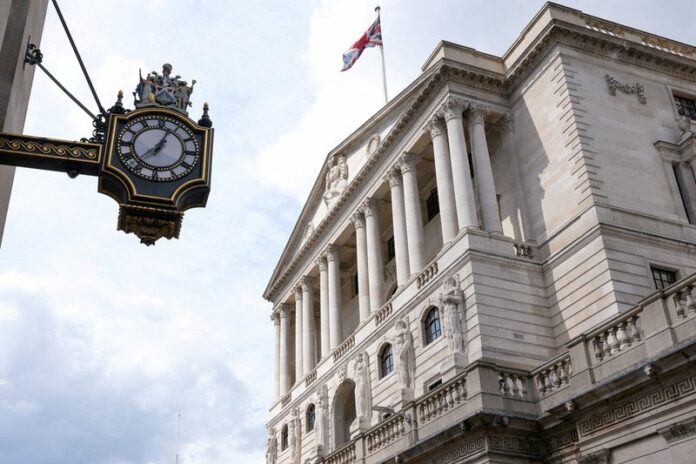 Bank of England to sell 8.7 billion stg of government bonds in Q4

LONDON (Reuters) -The Bank of England said on Thursday that it would sell around 8.7 billion pounds ($9.8 billion) of government bonds in the final quarter of 2022, becoming the first major central bank to begin active sales.

The BoE’s Monetary Policy Committee voted unanimously to reduce its 838 billion pounds of gilt holdings by 80 billion pounds over the next 12 months, broadly in line with plans announced last month.

The BoE stopped reinvesting the proceeds of maturing gilts in February, when its holdings were at a peak of 875 billion pounds, but the long average maturity profile means active sales are needed to reduce its holdings at the pace the MPC now seeks.

About half of the planned 80-billion-pound reduction – sometimes termed quantitative tightening (QT) – will come through regular BoE gilt auctions over the coming year.

The BoE will hold 15 gilt auctions between Oct. 3 and Dec. 8, with a planned size of 580 million pounds each.

Gilts will be offered in maturity buckets of 3-7 years, 7-20 years and over 20 years, with the BoE selling the gilts for which it is offered the best price.

The BoE has said it does not expect the programme to have a big impact on the market, though some analysts have expressed disquiet, given recent gilt market volatility and costly government measures to subsidise energy bills and cut taxes.

“The start of active QT adds to an increasingly challenging supply outlook. Depending on how much of the new fiscal measures need financing in 2022/23 (versus 2023/24 and beyond), we forecast net gilt supply could rise towards 120 billion pounds this year,” HSBC economists Liz Martins and Simon Wells said.

The BoE repeated that it would keep a close eye on market conditions, and reserved the right to change the sale programme, but that there would be a “high bar” to doing so and the MPC aimed to review the level of sales on an annual basis.