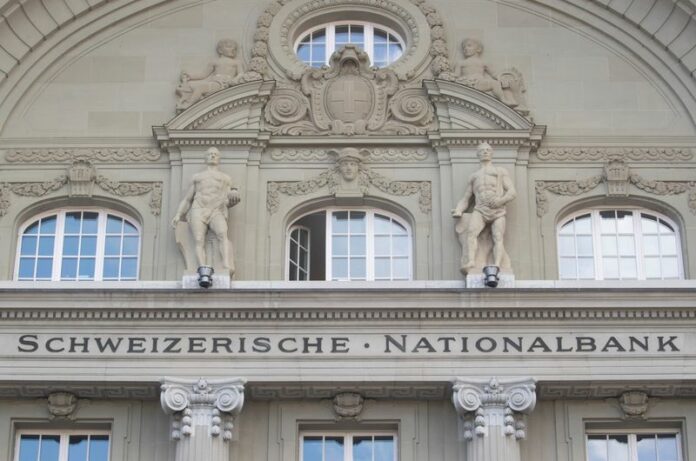 By John Revill and Silke Koltrowitz

ZURICH (Reuters) -Switzerland exited the era of negative interest rates on Thursday when its central bank joined others around the world in tightening monetary policy more aggressively to combat resurgent inflation.

The Swiss National Bank (SNB) raised its policy interest rate by 0.75 of a percentage point, ending the country’s seven-and-a-half year experiment with negative rates which sparked opposition from its financial sector and fears of asset bubbles.

Swiss government bond yields fell after Thursday’s move, reversing course following an initial spike, while the franc dropped broadly, falling against the dollar, euro and pound as markets had priced in a 100 basis point rate hike by the SNB.

The central bank did not exclude more rate rises to come.

“It cannot be ruled out that further increases in the SNB policy rate will be necessary to ensure price stability over the medium term,” SNB Chairman Thomas Jordan told a news conference.

Jordan declined to give details of the timing or size of any future hikes.

The SNB would also still use forex interventions, purchasing foreign currencies to rein in an “excessive appreciation” of the Swiss franc or selling them to prop up the currency, Jordan said.

He said there was no set exchange rate which would push the SNB into action.

The SNB’s decision to increase rates followed rising prices in Switzerland and hawkish moves by other central banks that are trying to keep a lid on resurgent inflation caused by spiralling energy costs, tight labour markets and supply chain bottlenecks.

The U.S. Federal Reserve lifted its benchmark rate by another 75 basis points on Wednesday, its third straight hike of that magnitude, and Norway’s central bank on Thursday hiked by half a point. The Bank of England is expected to increase its rate by 50 basis points later on Thursday.

The SNB will use SNB bills and repo transactions to absorb liquidity to ensure short-term money market rates remain close to the now-positive policy rate, governing board member Andrea Maechler said. It is also rolling out tiered remuneration of sight deposits that banks hold at the SNB.

Karsten Junius, an economist at J.Safra Sarasin, said the SNB’s hike was accompanied by a more dovish message compared to other central banks.

“The language by the SNB together with an inflation forecast that remains below 2% in 2024 make it quite unlikely that the SNB is planning for another 75 bp rate hike in December again,” Junius said.

The SNB originally imposed negative rates in December 2014 and lowered them again in January 2015 to minus 0.75%. Over the years it said the world’s lowest central bank rate was needed to curb the rise of the safe-haven Swiss franc.

But the SNB’s focus has switched to inflation, which hit 3.5% in August, the highest in 29 years although lower than most other European countries.

Negative rates were unpopular among Swiss banks, who saw them as a charge on their activities and also reduced lending margins.

The Swiss financial sector paid out 11.8 billion francs ($12.05 billion) in negative rates to the SNB during the past seven and a half years.

There were fears that ultra-low rates would fuel dangerous asset bubbles as investors bought up property to seek higher returns, although this did not happen, economists said.

“The risks to the financial system didn’t materialize and the economy learned to live with the stronger franc,” said UBS economist Alessandro Bee.

The Swiss Bankers Association said negative rates meant the country’s lenders had borne the brunt of the fight against the appreciating franc.

“Sometimes you need tough medicine to get better, but the banking sector will certainly be relieved that negative rates have ended,” said Martin Hess (NYSE:HES), chief economist at the Swiss Bankers Association.