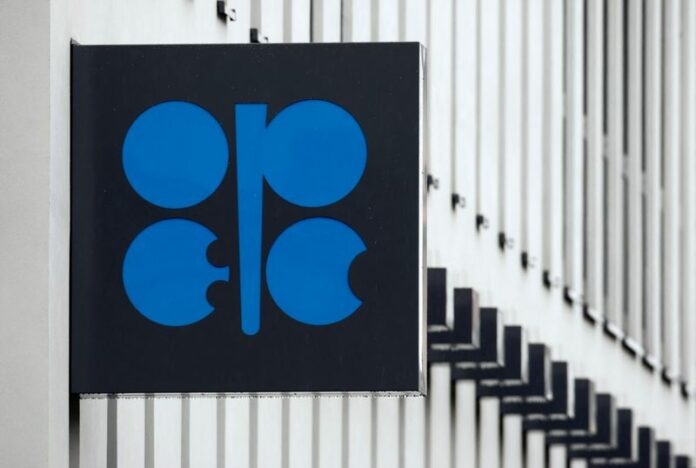 © Reuters. FILE PHOTO: The logo of the Organization of the Petroleum Exporting Countries (OPEC) in Vienna March 16, 2010. REUTERS/Heinz-Peter Bader/File Photo

LONDON Reuters) – OPEC oil output rose in September to its highest since 2020, surpassing a pledged hike for the month, after production in Libya recovered from disruption and Gulf members boosted output under a deal with allies, a Reuters survey found on Friday.

The Organization of the Petroleum Exporting Countries (OPEC) has pumped 29.81 million barrels per day (bpd) this month, the survey found, up 210,000 bpd from August and the highest since April 2020.

OPEC and its allies, a grouping known as OPEC+, has been boosting output for months to unwind cuts made in 2020. But with oil prices weakening amid concern of recession, the bias shifted to cuts for October and OPEC+ looks set to tighten supply further at a meeting on Wednesday.

“There are talks going on with some support for a cut of less than 1 million bpd,” an OPEC+ source said.

Their decision for September called for a 100,000 bpd increase in the group’s output target, of which about 64,000 bpd was meant to come from the 10 participating OPEC countries.

OPEC managed to over-deliver on this with a 130,000 bpd increase by participating members from August and the 210,000 bpd hike by all 13 producers, the survey found. Stil, OPEC is still pumping far less than called for.

Output from the 10 members was 1.32 million bpd below the September target, versus a 1.4 million bpd shortfall in August.

Libya, one of the members exempt from OPEC output agreements, and Nigeria each boosted supply by the same volume. Libyan output recovered further from disruption and tanker-trackers noted an increase in Nigerian exports.

Output in Iraq, OPEC’s second-largest producer, was little changed, and the United Arab Emirates and Kuwait increased supply in line with their targets.

There were no significant declines in output during September, the survey found.

The Reuters survey aims to track supply to the market. It is based on shipping data provided by external sources, Refinitiv Eikon flows data, information from tanker trackers such as Petro-Logistics, and information provided by sources at oil companies, OPEC and consultants.