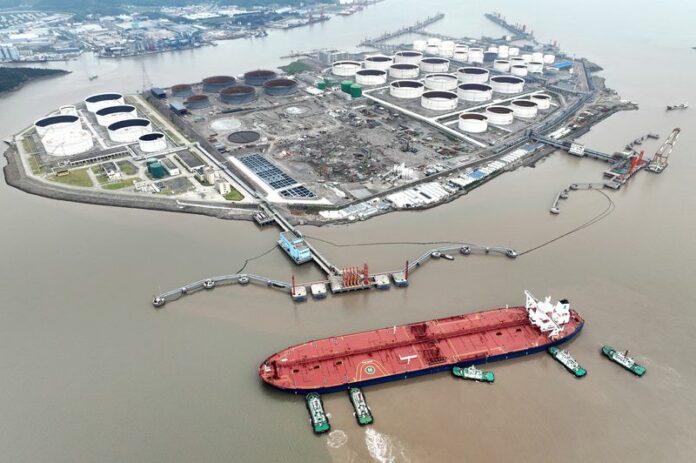 By Mohi Narayan and Muyu Xu

(Reuters) – Chinese refiners are likely to boost refined oil products exports in the last two months of 2022 and into early 2023 after receiving the biggest allocation from Beijing this year, trade sources and analysts said on Monday.

The increase in Chinese exports is likely to help stabilise global oil markets and partly replace supplies from Russia which will be hit by European Union embargoes in coming months.

It also allows the world’s No. 2 refiner to tap excess refining capacity and boost exports when its economy is struggling for growth after narrowly avoiding a contraction in the second quarter and the decline in the yuan to a 14-year low.

“A ramp-up in product exports from China will support energy-starved oil markets considerably as there are concerns about an impending EU embargo on Russian supplies,” said Sugandha Sachdeva, vice president of commodity and currency research at Religare Broking.

The new issue, the single largest allotment of 2022, takes total allotments of diesel, gasoline and jet fuel combined for 2022 to 37.25 million tonnes, on par with 2021.

Consultancy FGE estimated that refiners had around 7 million tonnes of quotas left from the previous four batches by end-September.

“Together with the new quotas, refiners have more than 20 million tonnes of quotas for fourth quarter,” FGE analysts said in a note.

Refiners would likely need to raise exports to near 2 million bpd over November and December to meet the allotments but high freight costs and weak gasoline export margins may prevent refiners from fully utilising the quotas by year-end, FGE said.

Chinese refiners are also expected to ramp up diesel exports by the most because it has the highest profit compared with gasoline and jet fuel which could tighten domestic supplies, analysts said. [MDIS/A] [LDIS/A]

“The seasonal tightness in the domestic gasoil market will limit the upside to gasoil exports until second-half November,” FGE said. China’s diesel demand rise seasonally in fourth quarter from autumn harvest and a lifting of a fishing ban.

Chinese refineries, especially state-owned refiners, will have to ramp up output to at least 82%, and teapots to around 60% if they were to utilise 80% of the issued quotas by year-end, estimates by local consultancy Longzhong showed.