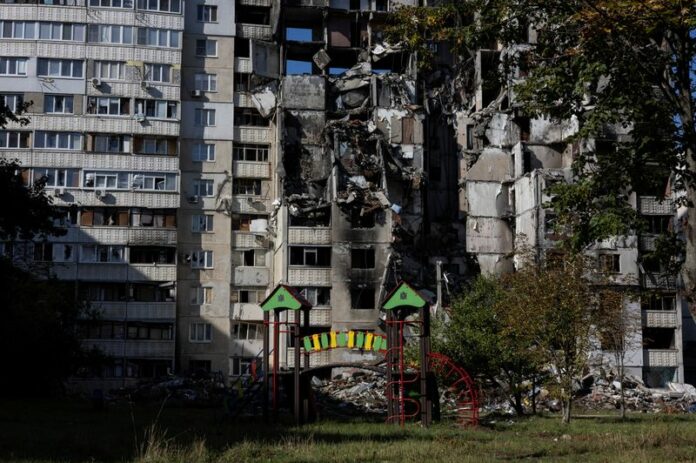 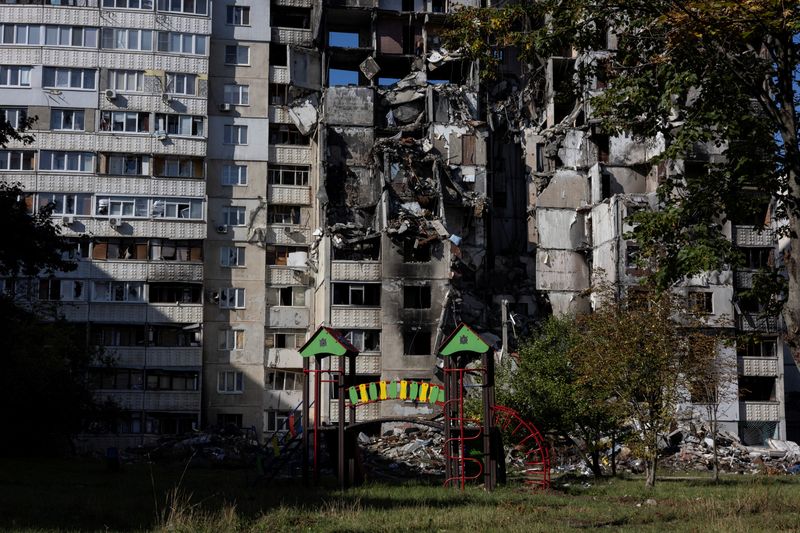 By Tom Balmforth and Pavel Polityuk

KHARKIV, Ukraine (Reuters) – In an abandoned tower block damaged by Russian shelling in Ukraine’s second city, Olga Kobzar plans to tough out winter for as long as she can without electricity, water and central heating by lighting the gas stove in her kitchen for warmth.

The 70-year-old, who lives alone in a devastated district of northern Kharkiv where the temperature can fall to -20 Celsius (-4 Fahrenheit), is at the sharp end of what Ukrainian officials say will be the grimmest winter in decades.

She is the last remaining inhabitant of her tower block in the Saltivka district, around 30 km (20 miles) from the Russian border.

Her neighbour’s flat was hit and others engulfed in flames, but hers is still intact, without basic utilities.

“It would be a sin to leave this place,” she says, gesturing at shelves of old books and the portrait of her late husband she believes keeps her safe.

The seven-month-old war has wrought huge damage to the energy network – and to residential areas in swathes of Ukraine – and officials fear Moscow could deliberately attack critical infrastructure when the frost sets in.

Officials are urging people to stock up on everything from firewood to electric generators and fear disruptions to the centralised home-heating season that are hard to prepare for because so many different things could go wrong.

“Not everything depends on us – a lot depends on where the missiles land and what is destroyed. The aggressors want to doom us to a cold and dark winter,” Kharkiv Mayor Ihor Terekhov said.

Residential areas in cities are centrally-heated by power stations fuelled by natural gas, but heating apartment blocks with smashed windows and walls is dangerous because the pipes could freeze and wreck the local system.

The latest tally is 50,000 buildings and houses damaged during Russia’s invasion as well as 350 of Ukraine’s thousands of heating facilities, including several big ones, the minister for communities and territories development told a briefing on Monday.

Just a few blocks from Kobzar’s flat, a priest, Viacheslav Koyun, is boarding up smashed windows for elderly neighbours so the heating can be turned on in their block.

“People are worried, the majority have left. We have literally five people in each stairwell. It’s mainly pensioners, I’ve only stayed because it wouldn’t be good to abandon the block and the pensioners,” he says.

If there are disruptions to the heating system, electricity supplies would become vital and many people have purchased electric-powered heaters.

But the electricity network could be overwhelmed if people use their own heating equipment en masse as the devices require more power, Sviatoslav Pavlyuk, director of the Association of Energy Efficient Cities of Ukraine, said on television.

Energy officials are declining to disclose detailed data about the state of infrastructure and national energy reserves citing wartime secrecy – and possibly so as not to stir panic.

But in a rare disclosure on Saturday, energy officials said two power sub-stations in an undisclosed location in the south were “completely destroyed” by Russian attacks in late September.

Parts of Kharkiv were plunged into darkness for hours last week after Russian missiles hit a power facility, at least the second incident of its kind last month.

“The damage that has already been done to the energy system is enormous,” Energy Minister German Galushchenko told Reuters last month.

Even in the western city of Lviv, which is largely untouched by the devastation of the war, the mayor has told people to stock up on wood in case of disruptions.

Ukraine, which stopped buying Russian gas in 2015 and now buys it from European countries, has natural gas in storage reserves located in its west.

If Russia halted natural gas transit via Ukraine in its escalating confrontation with the West, it would be a major challenge for Ukraine to maintain pipeline pressure to pump supplies to all its regions, energy analysts say.

In the region outside Kyiv which has not been hit by missiles in months, Halyna Sachenko, 76, says she fears there might not be enough gas where she lives.

“I bought wood, but there isn’t enough for a long time – in the start of the 1990s we burnt coal, but you can’t buy coal these days.”

Back in Kharkiv, Kobzar says she has bigger worries than the cold: “If there’s frost and it’s cold, I’ll stay somewhere for a bit, maybe stay with someone somehow. Most important is my son is healthy and comes home alive, I don’t need anything else.”