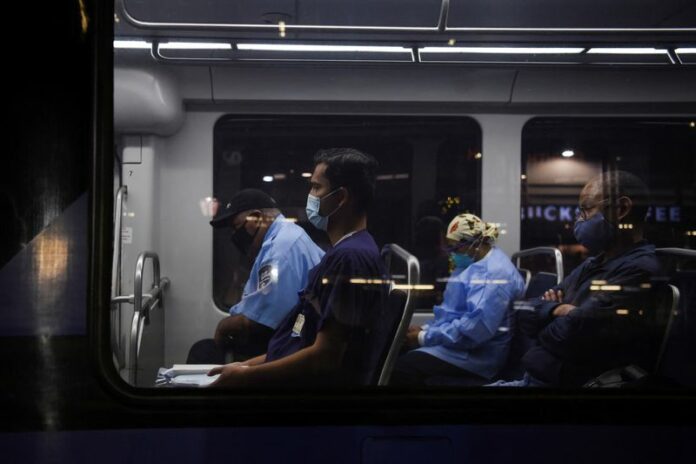 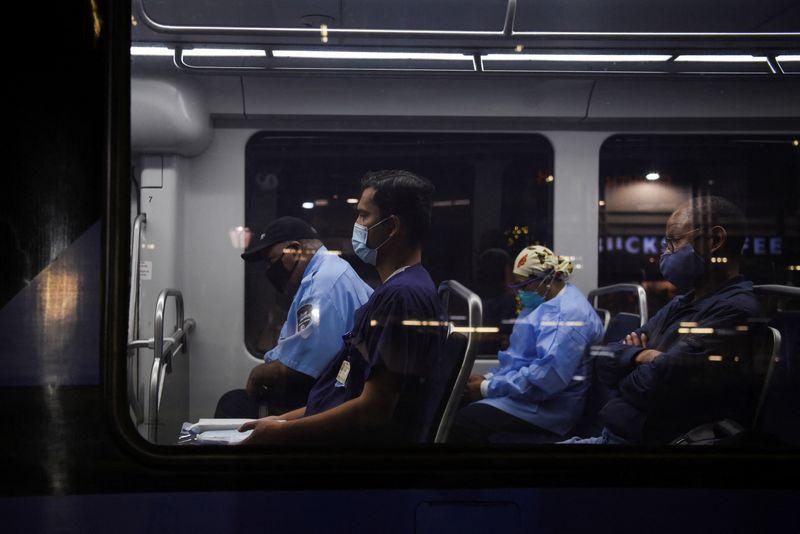 © Reuters. FILE PHOTO: Healthcare workers leave on the METRORail following a shift change as the Omicron variant of the coronavirus continues to spread through the country in Houston, Texas, U.S., December 29, 2021. REUTERS/Callaghan O’Hare

The justices turned away an appeal by the states after a lower court declined to immediately consider their claims that the vaccine rule violates federal administrative law and tramples over powers reserved for the states under the U.S. Constitution. The Democratic president’s administration issued the rule in November 2021.

The Supreme Court ruled in a 5-4 decision in January to let Biden enforce the healthcare worker mandate while litigation on its legal merits continued in lower courts. The justices at the same time decided 6-3 to halt his administration’s rule requiring vaccines or weekly COVID-19 tests for employees at businesses with at least 100 employees.

Biden’s administration had argued that the two mandates would save lives and strengthen the U.S. economy by increasing the number of vaccinated Americans. The United States leads the world in COVID-19 deaths, reporting more than a million since the pandemic took hold in the early months of 2020.

The federal healthcare worker rule requires vaccination for about 10.3 million workers at 76,000 healthcare facilities including hospitals and nursing homes that accept money from the Medicare and Medicaid government health insurance programs for elderly, disabled and low-income Americans.

The Supreme Court in January concluded that Biden’s regulation fit within the power Congress conferred on the federal government to impose conditions on Medicaid and Medicare funds. It decided that ensuring that medical providers take steps to avoid transmitting a dangerous virus to their patients is consistent with the “fundamental principle of the medical profession: first, do no harm.”

The mandate had also been blocked in 15 other states, including Arizona and Texas, following litigation there.

After the justices in January stayed preliminary injunctions issued by lower courts against the rule, including in Missouri’s lawsuit, the state asked the St. Louis-based 8th U.S. Circuit Court of Appeals to expedite hearing the merits of the case.

In April, the 8th Circuit instead sent the case back to a federal judge to proceed to a trial. Missouri then appealed to the Supreme Court, contending that the mandate violates federal administrative law and tramples over powers reserved to the states under the Constitution.