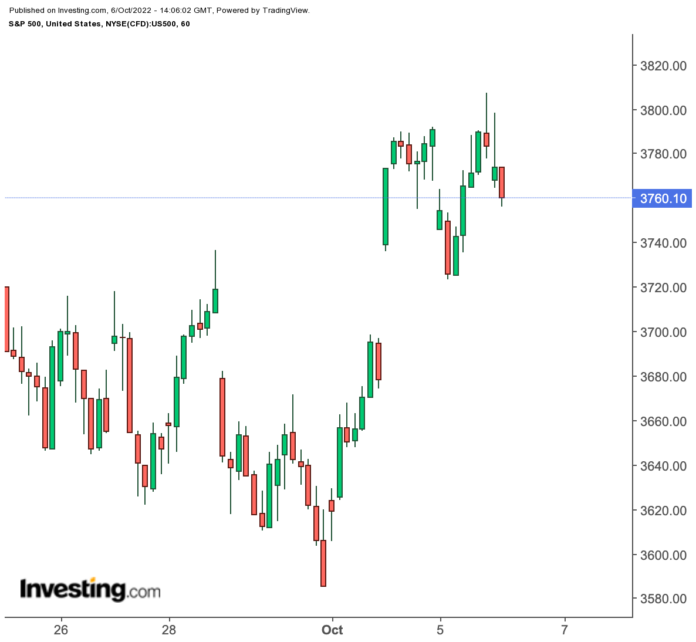 4 Reasons Why The Bear Market May Not Be Over Yet

The S&P 500 is off to its best start to a Q4 in history
However, the main reasons behind the rally appear to be short-term in nature
Earnings, interest rates, recession risks, and the European energy crisis are still major headwinds

The S&P 500 started the month with an impressive rally, jumping +5.7% between Monday and Tuesday—its best performance on the first two trading days of a Q4 in history. The previous record was in 1990 when the index gained 3.1% on the first two days to end the quarter up +4.6%. However, this is not as unusual as it sounds. If you look at the 100 most significant daily rises in the S&P 500 since 1928, you would think that most of them were in a bull market, but they were not. In fact, more than half (58%) were in bear markets.

We can point to two main short-term reasons for the jump:

Monday’s industrial activity numbers and Tuesday’s employment data in the United States give investors hope that the Federal Reserve may ease interest rate hikes and get out of this streak of 75 basis point rate hikes. However, we must remember that we experienced a similar rally a few months ago with better-than-expected inflation data, and the stock markets soared. Still, the Fed did not change its roadmap on that occasion.
The result of the first round of elections in Brazil, one of the world’s largest commodity exporters, sent the poll to a tight second voting round. The close race between former president Lula and president Bolsonaro implies more moderate economic positions from both sides—but especially for Lula, the front-runner left-wing candidate poised to adopt a more socialist economic policy. European and North American companies with substantial exposure in Brazil are benefiting from the trend.

The current bear market is the longest since 2007-2009. The average duration of a bear market over the last 82 years is 14 months, although it is true that there have been all kinds of durations in all that time. For example, the 2020 bear market only lasted one month, and the 2000-2002 bear market lasted 31 months.

Central banks are going to keep raising interest rates. The data is unlikely to dissuade the Fed from another sizable rate hike in November. Even yesterday, San Francisco Federal Reserve Bank President Mary Daly said she sees a high bar for slowing the pace of 75 basis point hikes.
The market expects the S&P 500 earnings growth rate in the third quarter to be “only” 3.2%. If that is the case, it would be the lowest growth rate since the third quarter of 2020.
Winter is coming, and Europe still hasn’t figured out how to deal with the Russian gas cutoff, restrictions, and other issues.
Also, yesterday’s macro data in Europe wasn’t exactly good:

The composite PMI for the Eurozone comes out at 48.1, which extends the slowdown to a third consecutive month and points to the fastest decline in output since January 2021. Production in both the manufacturing and services sectors falls.
Germany’s services PMI falls to 45, pointing to a third consecutive month of contraction in the sector and the steepest since May 2020.
Spain’s services PMI fell to 48.5 from 50.6 the previous month. This reading points to the first contraction in the country’s services sector since January.

To end on a positive note, we are in October, a month typically 36% more volatile than the average of the other 11 months of the year. For the time being, the VIX volatility index is holding up and is nowhere near its previous peaks for the year.

Disclosure: The author does not own any of the securities mentioned in this article.