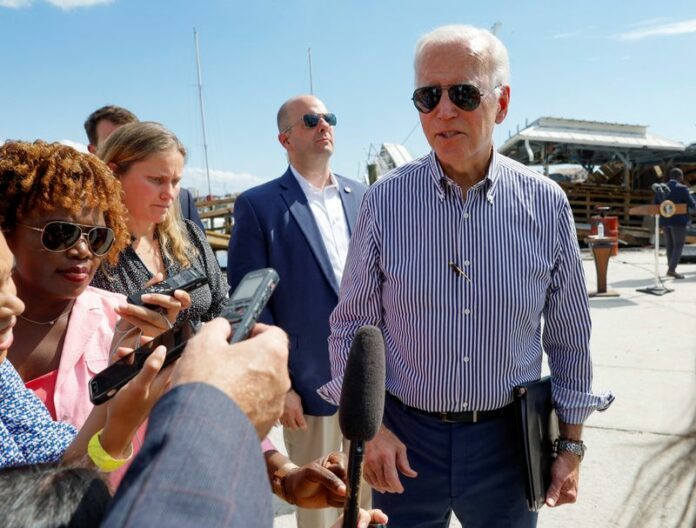 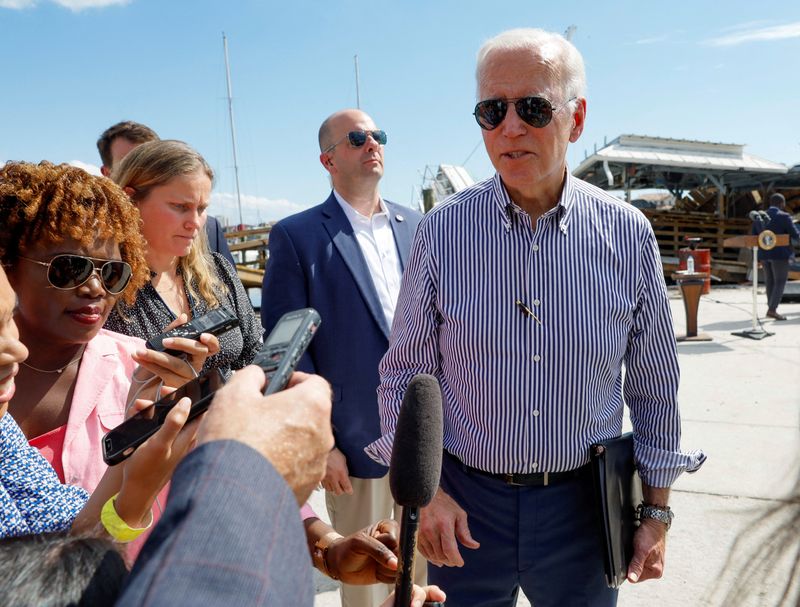 By Jeff Mason and Nandita Bose

WASHINGTON/ON BOARD AIR FORCE ONE (Reuters) -U.S. President Joe Biden expressed disappointment on Thursday over announced plans by OPEC+ nations to cut oil output and he and officials said the United States was looking at all possible alternatives to keep prices from rising.

Despite that move, Biden said he did not regret his summer trip to Saudi Arabia, which he said was focused on the Middle East.

OPEC+ agreed to steep oil production cuts on Wednesday, curbing supply in an already tight market and raising the possibility of higher gasoline prices right before the U.S. midterm elections in November, when Biden’s Democrats are defending their control of the House of Representatives and the Senate.

“We’re looking at what alternatives we may have,” Biden told reporters at the White House when asked about the OPEC decision.

“There’s a lot of alternatives. We haven’t made up our minds yet,” he said.

Biden this week called on his administration and Congress to explore ways to boost U.S. energy production and reduce the cartel’s control over energy prices. Some of his options include releasing more oil from the Strategic Petroleum Reserve or exploring a curb on energy exports by U.S. companies.

Biden went to Saudi Arabia in July but ended the trip without a deal for the OPEC+ group to help bring down gasoline prices, a key political problem for him at home.

Asked if he regretted his decision to go to Saudi Arabia, Biden said that trip was not essentially about oil.

“The trip was about the Middle East and about Israel and … rationalization of positions,” he said. “But it is a disappointment,” he added of the OPEC+ decision, and indicates problems.

The White House has sought to take credit for a decline in gasoline prices in recent months after Biden started a series of oil releases from the SPR. High inflation has been a political albatross to the president, and the dip in prices a key victory.

The OPEC+ decision could threaten that momentum and benefit oil-exporter Russia, which is suffering under U.S. -led sanctions.

“We believe it’s unnecessary and unwarranted at a period where, if you look at the global energy picture, oil picture, the lack of supply continues to be a significant challenge,” Biden’s economic adviser, Brian Deese, told reporters on Air Force One on Thursday.

“What the president has directed us, and it continues to be the case, is to take nothing off of the table,” Deese said when asked whether the U.S. could limit energy exports.

“We will be assessing and consulting closely with Congress on a range of issues on the back end of this,” he said.