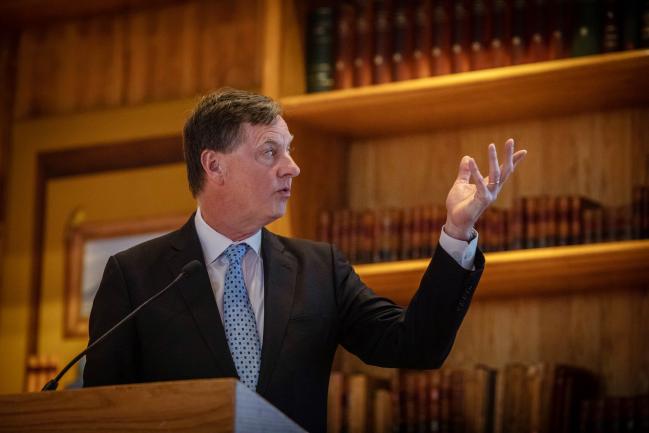 &copy Bloomberg. Charles Evans, president of the Federal Reserve Bank of Chicago, speaks during the Global Interdependence Center (GIC) Central Banking Conference in Mexico City, Mexico, on Thursday, Feb. 27, 2020. Mexico’s central bank slashed its growth forecast for this year and said it will take longer than expected for inflation to slow to target, suggesting policy makers have limited room to lower borrowing costs to stimulate the economy.

(Bloomberg) — The Federal Reserve’s benchmark interest rate will probably be at 4.5% to 4.75% by next spring as central bank officials worry about high core inflation, Chicago Fed President Charles Evans said.

“We have to look at the momentum in sort of that central component of inflation, and that’s really the part that I believe has most of my colleagues and myself nervous,” Evans said Thursday at a meeting of the Illinois Chamber of Commerce. “We look to me, according to our reports, headed for 4.5% to 4.75% by sometime next year — which, given how fast we’ve been raising interest rates, is likely to be the springtime.”

A pickup in so-called core inflation in August, which excludes food and energy prices, has become a cause for concern among Fed officials after the figure was trending down in recent months.

The Fed raised its benchmark rate by three-quarters of a percentage point at its last policy meeting in September for a third time in a row, bringing it to 3% to 3.25%, and officials signaled they would probably increase it by another 1.25 percentage points over the final two meetings of the year.

The next gathering is Nov. 1-2. A Labor Department report on September employment and wages due out Friday, as well as a data on last month’s consumer prices to be published Oct. 13, will be critical inputs to the November rate decision.