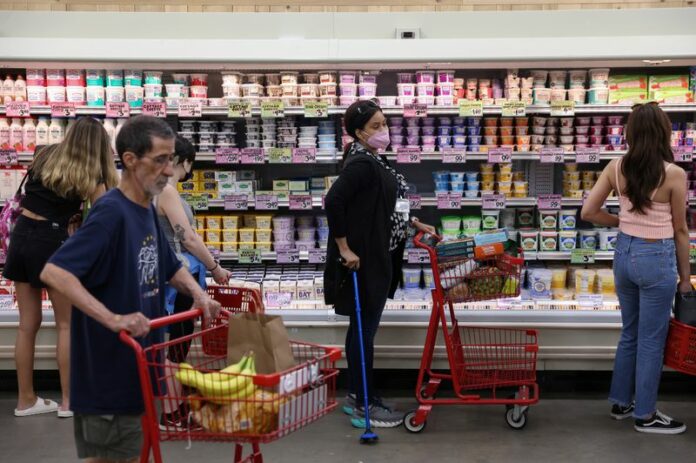 WASHINGTON (Reuters) -New Federal Reserve Governor Lisa Cook on Thursday added her voice to the U.S. central bank’s broad consensus for continued interest rate hikes, as other policymakers reiterated they too see no let-up in their effort to vanquish inflation.

U.S. inflation “remains stubbornly and unacceptably high, and data over the past few months show that inflationary pressures remain broad-based,” requiring further policy tightening to be sure it begins falling, Cook said in her first public remarks on monetary policy since joining the Fed’s Washington-based board.

Cook, speaking to the Peterson Institute for International Economics in Washington, said recent declines in job vacancies, slowing rent increases and other data suggesting price pressures might be easing were not enough to conclude the Fed had rounded the corner in its fight against rising prices.

Inflation “must come down, and we will keep at it until the job is done,” Cook said, repeating what has become the Fed’s trademark phrase to relay its willingness to raise its target policy rate to a restrictive level and slow the economy, even at the risk of less economic growth and more unemployment.

Her comments put Cook, who has a doctorate in economics and is the first Black woman on the Fed’s governing board, firmly behind the central bank’s drive for continued rate increases.

Fed Governor Philip Jefferson, in his debut remarks this week, said he too was “resolute” about controlling inflation.

Fed officials in recent days have nodded to signs that inflation may be easing, to stress in financial markets, and to the pressure their monetary policy tightening is putting on economic conditions in other countries – and given no indication they are about to change their plans.

Fed Governor Christopher Waller delivered that message with his characteristic bluntness on Thursday.

“I anticipate additional rate hikes into early next year,” he said, adding the Fed should not pause rate hikes until it sees signs of inflation moderating.

As for slowing rate hikes because of financial stability concerns, he said, “let me be clear that this is not something I’m considering or believe to be a very likely development.”

As of the Sept. 20 to 21 policy meeting, policymakers were signaling they would deliver a fourth consecutive rate hike of three-quarters of a percentage point at their upcoming Nov. 1 to 2 meeting, and further rate increases after that.

“Inflation is high right now and we need a more restrictive setting of monetary policy,” Chicago Fed President Charles Evans told the Illinois Chamber of Commerce on Thursday. Last month’s policymaker projections suggest the U.S. central bank’s benchmark overnight interest rate is headed to the 4.50%-4.75% range next year, “which given how fast we’ve been raising interest rates, is likely to be the spring,” he said.

Minneapolis Fed President Neel Kashkari, speaking at a separate event on Thursday, said at this point there has been “almost no evidence” that inflation had even peaked, making a shift in the Fed’s plans unlikely.

“We need to keep our eyes open for risks that can be destabilizing for the American economy as a whole,” Kashkari said at the Bremer Financial Corporation Fall Leadership Conference. “But to me, the bar to actually shifting our stance on policy is very high.”

Traders are betting that the Fed will raise rates further but by late next year will reverse course. Policymakers have been pushing back.

“My presumption is that we will not be cutting rates next year at all,” Cleveland Fed President Loretta Mester said Thursday.

The Fed is parsing through data that has begun to, at least somewhat, turn in its favor, particularly a recent drop in job vacancies that may point to a looser labor market and lower wage pressure.

But top-line inflation remains lodged at a four-year high, with the measure most closely watched by the Fed still running at more than triple its 2% target.

“The widespread nature of the inflation pressures suggests that the overall economy is very tight,” Cook said in her speech on Thursday.

As a result, Cook said she “fully supported” the 75-basis-point rate increases approved at the three policy meetings she has attended as a Fed governor so far, agreed with the policy of “front-loading” monetary tightening to quicken its impact, and felt changes in policy needed to be rooted in inflation actually falling, not on forecasts of it doing so.

Cook said the Fed’s preemptive approach was appropriate, adding that while lowering inflation will bring some pain, not doing so will make it more painful to restore price stability in the future.

“In the current situation, with risks to inflation forecasts skewed to the upside, I believe policy judgments must be based on whether and when we see inflation actually falling in the data, rather than just in forecasts.”

She said that while at some point it will be appropriate to slow the pace of increases, she did not hint at her preference for the Fed’s policy decision next month.

“The path of policy should depend on how quickly we make progress toward our inflation goal,” Cook said.

Speaking with the New York Times, San Francisco Fed President Mary Daly said on Thursday that while she is “very open” to slowing the pace of rate hikes, she could still see a 75-basis-point rate hike next month, followed by a 25-basis-point hike, depending on the data.

To Waller, there is little in upcoming data releases – including the Labor Department’s monthly jobs report on Friday and its Consumer Price Index report next week – that could change his view of the economy.

“I expect most policymakers will feel the same way,” Waller said. “I imagine we will have a very thoughtful discussion about the pace of tightening at our next meeting.”