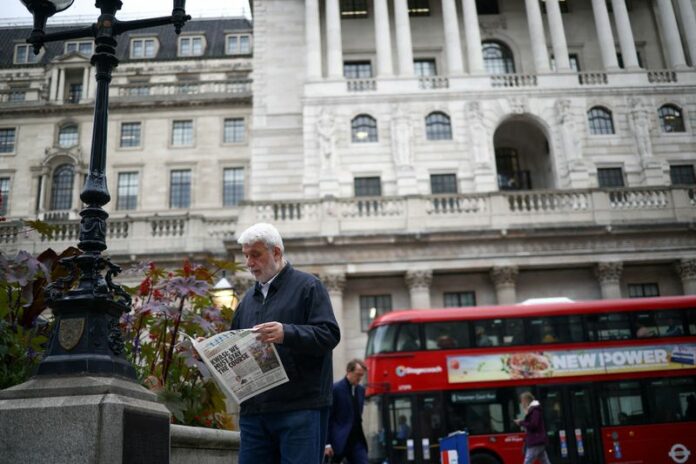 © Reuters. FILE PHOTO: A person reads a newspaper outside the Bank of England in the City of London financial district in London, Britain, October 3, 2022. REUTERS/Henry Nicholls

By Tommy Wilkes and Carolyn Cohn

LONDON (Reuters) – UK pension schemes are racing to raise hundreds of billions of pounds to shore up derivatives positions before the Bank of England calls time on support aimed at keeping them afloat.

Governor Andrew Bailey said on Tuesday that the BoE would stop buying bonds as planned on Oct. 14, which would leave pension schemes scrambling after a surge in yields to meet a collective cash call estimated to be at least 320 billion pounds ($355 billion) without a buyer of last resort. The central bank had on Tuesday made its fifth attempt in just over two weeks to restore order in markets.

With pension schemes calling for a deadline extension, the Financial Times on Wednesday reported the BoE had earlier signalled to lenders it might continue the emergency programme beyond Friday if market conditions demanded it, stoking confusion.

Pension funds are trying to raise cash by selling off UK government bonds, or gilts, index-linked and corporate bonds but the fundraising task is intensifying, sources say.

“This week with the gilt market not fully calmed, lots (of schemes) are now looking at this and saying we actually need to do a bit more and so there is renewed action to get even more collateral across,” said Steve Hodder, a partner at pension consultants Lane Clark & Peacock.

It is not known how much funds have already raised in cash. Some will also be cutting their overall LDI exposure if they cannot meet the collateral demands, consultants say.

Tuesday’s BoE intervention targeted the relatively small index-linked bond market, which is dominated by pension funds and suffered another significant selloff this week.

The Pensions and Lifetime Savings Association on Tuesday called for the BoE to consider continuing its bond-buying until Oct. 31 “and possibly beyond”.

“You’ve got three days left now. You’ve got to get this done,” Bailey warned the funds late on Tuesday.

LDI helps schemes match their liabilities – what they owe members – with assets. Pension funds had been putting up cash to withstand a move in government bond yields of 100 to 150 basis points – a huge safety net that has been wiped out by some of the most volatile trading on record.

The scramble for cash in the 1.6 trillion pound LDI industry is forcing pension funds to dump government and corporate bonds and even exit less liquid assets such as property and private equity. Investment manager Columbia Threadneedle said on Tuesday it has suspended dealing in the 453 million-pound CT UK Property Authorised Investment Fund and its feeder fund to restore liquidity.

Barclays (LON:BARC) said on Tuesday it would make extra liquidity available to its LDI counterparties as part of the BoE’s Oct. 10 launch of an expanded repo facility. The facility allows schemes to park more assets including low-rated corporate bonds in return for cash.

He estimates the total cash funds now need to post could be 320 billion pounds or higher.

“We are definitely not there,” he said, referring to whether funds were close to raising the required cash by selling assets. He described last week as “one of the biggest ever for sell orders. You are seeing more sales this week.”

The increased need for collateral was driven by pressure from regulators led by the BoE to prevent further stresses on the system, said Hemal Popat, partner, investments at Mercer.

He estimates pension funds could sell assets totalling around 300 billion pounds as they adjust hedging positions, including 100 billion pounds from gilts as well as assets like global credit, global equities and asset-backed securities. It is not clear how much they may have sold already.

“The bottom line is a lot of schemes need to rebalance their portfolios,” he said. “That is not going to stop and will take time.”

(This story has been corrected to clarify Sept. 28 was the date BoE announced bond buys in paragraph 14)