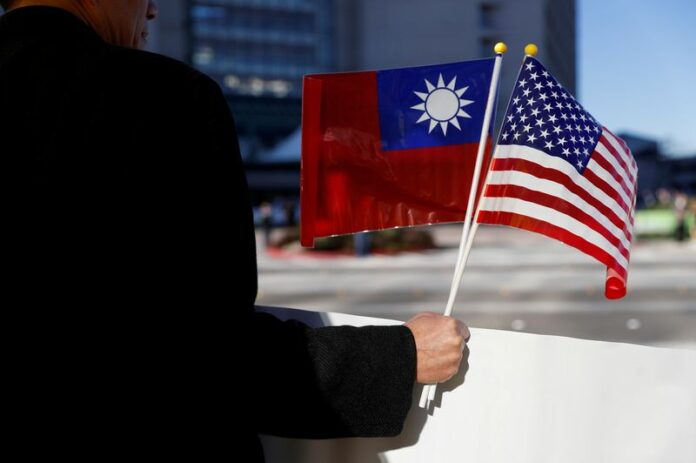 © Reuters. FILE PHOTO: A demonstrator holds flags of Taiwan and the United States in support of Taiwanese President Tsai Ing-wen during an stop-over after her visit to Latin America in Burlingame, California, U.S., January 14, 2017. REUTERS/Stephen Lam/File Photo

The Senate included much of the expansive “Taiwan Policy Act of 2022” in the $817 billion National Defense Authorization Act, or NDAA, on which debate began on Tuesday. The Senate Foreign Relations Committee approved the Taiwan legislation in September, sparking anger from Beijing.

China considers Taiwan to be its territory and has never

renounced using force to bring it under its control.

It was not immediately clear which Taiwan provisions would make it into the final version of the NDAA, but senators and Senate aides said many would become law if the NDAA is passed as expected this year.

Here are some highlights:

The Taiwan bill includes $6.5 billion in grant assistance over five years to bolster Taiwan’s military capabilities, and authorizes up to $2 billion in loans.

The grants would be contingent on Taiwan increasing its own defense spending, and could give Washington extra sway in Taiwan’s defense procurement given U.S. military planners’ desire to see the island prioritize mobile equipment that could better survive a Chinese assault than large-scale systems.

The bill also takes steps to track and expedite delivery of military equipment to Taiwan.

It requires the State Department and Pentagon to expand joint military training in order to improve the island’s defenses and increase interoperability with U.S. forces.

Defense analysts say increasing the two militaries’ ability to operate together would be critical in responding to any Chinese attack should the United States choose to do so, as President Joe Biden recently suggested.

The bill lays out specific sanctions for the president to impose in the event of “significant escalation in aggression” against Taiwan by China, language intended to increase U.S. deterrence.

That would include sanctions against high-ranking Chinese Communist party members, government officials and agencies, as well as state-owned and controlled banks.

Other sanctions would block and prohibit property-related

transactions in the United States and bar those targeted from

obtaining visas to enter the country.

Some elements of the Taiwan measure have raised concerns about increased tensions with China at the State Department and White House. Congressional aides said these are unlikely to make it into the NDAA.

For example, the bill calls for Taiwan to be treated as a “major non-NATO ally” to facilitate the transfer of defense materials and services.

And it would require Washington to assess renaming its de facto U.S. embassy from the Taipei Economic and Cultural Representative Office to the Taiwan Representative Office. Critics say that change would be largely cosmetic and sure to antagonize Beijing while not materially aiding Taiwan.