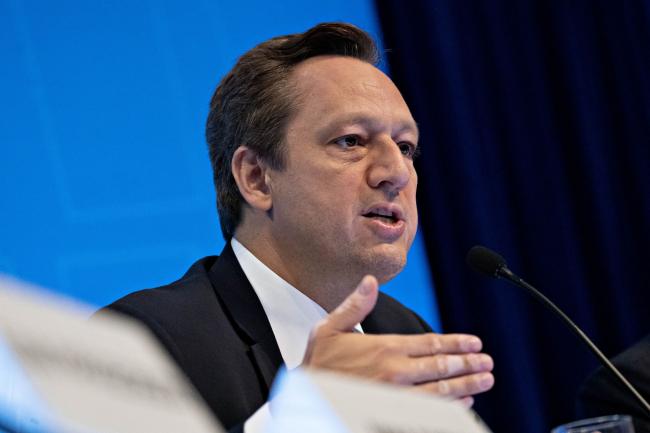 &copy Bloomberg. Tobias Adrian, financial counselor and director of the monetary and capital markets department at the International Monetary Fund (IMF), speaks at a Global Financial Stability Report news conference during the annual meetings of the IMF and World Bank Group in Washington, D.C., U.S., on Wednesday, Oct. 16, 2019. The IMF made a fifth-straight cut to its 2019 global growth forecast, citing a broad deceleration across the world’s largest economies as trade tensions undermine the expansion.

(Bloomberg) — The risks of a breakdown of the world financial system have risen to levels only seen during past crises as the global economy confronts the aftershocks from the coronavirus pandemic and Russia’s invasion of Ukraine, according to the International Monetary Fund.

The Washington-based organization warned on Tuesday of the danger of rapid, disorderly declines in prices of stocks and other assets and urged central banks to carefully and clearly calibrate their necessary efforts to reduce sky-high inflation.

“The global environment is fragile,” IMF Financial Counsellor Tobias Adrian wrote in a forward to the Fund’s latest Global Financial Stability Report. “Financial stability risks have increased and the balance of risks is tilted to the downside.”

Indeed, the IMF on Tuesday did predict a worsening outlook for the global economy as a whole, underscoring that efforts to control the highest inflation in decades may add to the damage from the Ukraine war and China’s slowdown.

Financial markets are extremely volatile and less liquid, as investors face an environment of elevated inflation and aggressive central bank tightening not seen in decades, the IMF said. Fears of a global recession are rising and the dangers of debt defaults are increasing as interest rates march higher.

Emerging markets face a multitude of hazards, from the strength of the dollar and high borrowing costs to stubbornly high inflation and volatile commodity markets, the IMF said. As much as 29% of emerging market banks would breach capital requirements in a dire scenario that includes a resurgence of the pandemic, according to IMF stress tests.

The Fund said that poorer nations face severe stress and that many frontier markets could face defaults and difficult debt restructurings. More than half of all low-income countries are judged by the IMF to be already in, or to have a high probability of entering debt distress.

After rapid run-ups in recent years, the risks of significant declines in house prices across a range of countries are rising, the report added.

“Soaring borrowing costs and tighter lending standards, coupled with stretched house valuations, could lead to a sharp decline in house prices,” the IMF said in suggesting that property markets may have reached a tipping point.

In a severely adverse scenario, house prices in emerging markets could fall nearly 25% over the next three years, while those in advanced economies could drop by more than 10%, after taking account of inflation, according to calculations by the lending agency.