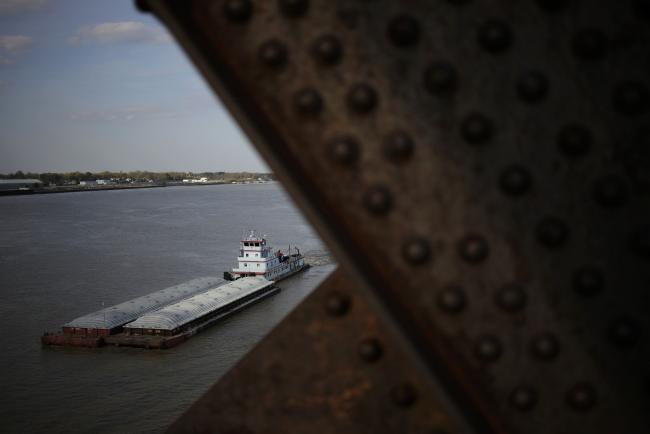 &copy Bloomberg. Barges travel along the Ohio River in Louisville, Kentucky, U.S., on Tuesday, April 6, 2021. US barge grain movements in the week ended March 6 totaled 848,441 tons, a 93% increase over the previous week and a 108% increase compared with the same period in 2020, according to the US Army Corps of Engineers.

(Bloomberg) — The Mississippi River isn’t out of the woods as falling water levels along its major tributaries threaten to deepen a crisis on the US’s main artery for moving vital products.

While one bottleneck may have been eliminated on the Mississippi near Stack Island, additional pressure points are emerging along its more than 2,000 miles and now the Ohio River — which provides about 60% of the Lower Mississippi River’s water — is seeing closures at multiple locations due to groundings and dredging work.

The Ohio is a significant vein of heavy industry shipping across the US Rust Belt. In total, some 184 million tons of cargo are shipped along it each year. It’s the aluminum industry’s equivalent to Silicon Valley. The river also passes through the heart of coal country — and is the most commonly transported product.

In the Mound City area alone — just north of Cairo, where the Ohio meets the Mississippi — industry is working to refloat tows, according to the American Commercial Barge Line. A dredge is in the area to cut a deeper channel, but is unable to assist until the currently-grounded tows are refloated, which may prove difficult amid unfavorable weather conditions.

A punishing drought has meteorologists warning that lower water levels will persist, crippling trade for weeks to come. While those levels attract notice, overall the river isn’t in the worst shape it has ever been, said Jeff Graschel, a hydrologist at the Lower Mississippi River Forecast Center.

“We are getting water levels that are comparable to 2012,” Graschel said. “It is basically from the drought we have had in the Midwest over the summer.”

Further downstream on the Mississippi, dredging crews are expected to begin work Tuesday to relieve low levels that forced a section near Battle Axe, located at mile 681 of the Lower Mississippi River — to close temporarily last week. Once the work begins, there will be a 24-hour closure, the ACBL said.

The timing of these further strains isn’t ideal as negotiations with a major rail union raise the prospects of a railroad strike across the US, which could further choke the movement of oil, coal, minerals, chemicals and grains.

Even so, there has not been an increase so far in rail traffic related to barge delays, according to Lee Klaskow, a senior analyst at Bloomberg Intelligence.

“The reason why products go on barges is that it’s much more economical and chances are the shipper and the receiver are on that waterway,” Klaskow said. “Getting that product onto the rails is not as easy as just snapping your finger and saying, ‘Oh I’m gonna call CSX (NASDAQ:CSX) and see if they could do it for me’ because there is a possibility that it might not be on a rail network.”

A single barge can carry the equivalent of 16 jumbo freight cars on the rails and 70 trucks, according to the US Army Corps of Engineers.

Graschel said the river did get some relief as remnants of Hurricane Ian wrung themselves out across the Midwest last week. A bubble of high water is moving down the Mississippi and is close to Arkansas City. However, without prolonged rain the overall state of the stem is likely to remain bleak and get worse.

In recent times, the worst conditions were in 1988 and while Graschel said the Mississippi isn’t there yet, it’s possible if things don’t improve. The forecast does call for some rain across the Midwest and Arkansas in the next few days.

In addition to the threat to traffic, the low water is allowing salt water to move upstream from the Gulf of Mexico. Many smaller communities south of New Orleans get drinking water from the Mississippi and this threatens those supplies.

The Army Corps of Engineers is constructing barriers to keep the salt at bay, which is the first time it has had to do this since 2012.