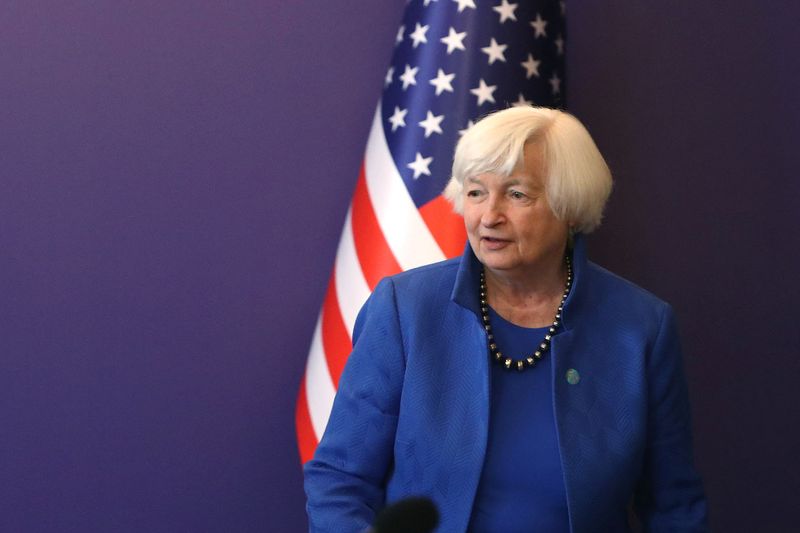 Yellen told the inaugural meeting of G20 joint finance and agriculture ministers that Putin and his officials – including those taking part in meetings in Washington this week – were responsible for “immense human suffering” caused by the war, a Treasury official said.

“That includes the innocent lives taken by President Putin’s barbaric missile attacks across Ukraine yesterday,” she said, referring to the most widespread wave of air strikes to hit away from the front line since the start of the war on Feb. 24.

Russia was represented at the meeting Finance Minister Anton Siluanov, who joined the meeting virtually, a source familiar with the meeting said.

Yellen did not leave the meeting when the Russian spoke, the source said. She and other Western officials left their seats during the spring meetings of the International Monetary Fund and World Bank in April, but decided to stay put to rebut any points made by the Russian speakers, U.S. officials said.

Russia says it is waging a “special military operation” in Ukraine to rid it of nationalists and protect Russian-speaking communities. Ukraine and the West say it is an unprovoked war of aggression.

Yellen said Russia’s blockade of ports and destruction of agricultural infrastructure had disrupted global supply chains and food production, with the impact felt particularly in developing countries that Russia “falsely claims to support.”

She also called on G20 countries to increase financial aid to initiatives such as the Global Agriculture and Food Security Program, to which Washington just gave $155 million, and to avoid all food export restrictions.

The United States had announced nearly $10 billion in assistance this year to provide critical support to food-insecure countries, Yellen said.

She said G20 members should urge international financial institutions to continue implementing commitments made in their Action Plan to Tackle Food Insecurity.

The group as a whole offered a freeze in debt service payments to low-income countries from May 2020 through the end of 2021, suspending $12.9 billion in debt-service payments, but refused to extend it into 2022.