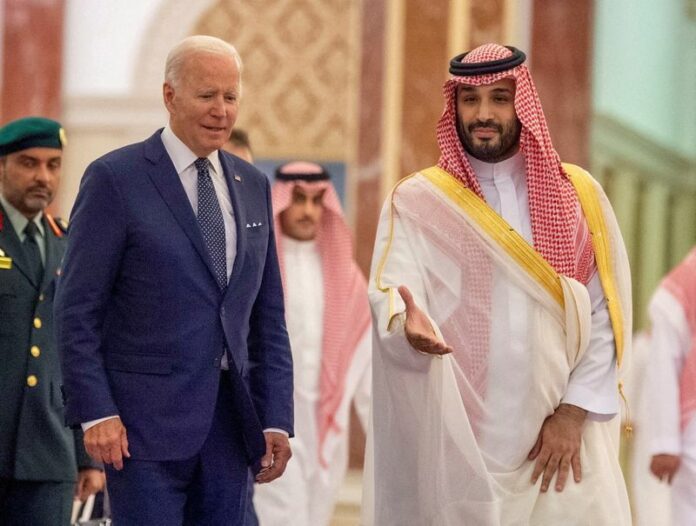 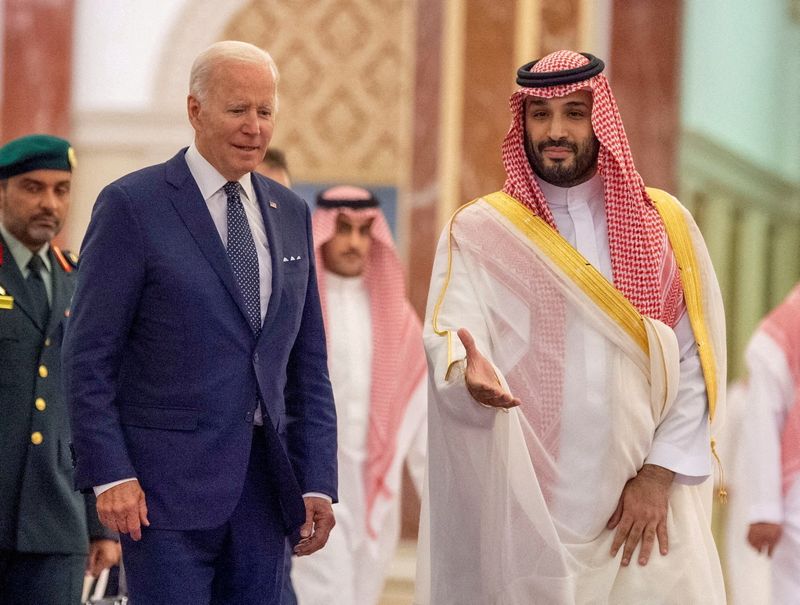 RIYADH (Reuters) – Neither side is backing down in a battle of wills over oil between Saudi Arabia’s Crown Prince and U.S. President Joe Biden, putting severe strain on their countries’ energy-for-security alliance, although a full rupture looks unlikely, Gulf sources and experts said.

As de facto leader of the OPEC+ oil group, Saudi Arabia risked U.S. wrath when the petroleum producers decided to cut output even after the Biden administration sought to stay OPEC’s hand for a month with an eye on U.S. mid-term elections.

The move drove up oil prices, and on Tuesday Biden vowed “there will be consequences” for U.S. ties with Riyadh, after several senators called on the White House to freeze all cooperation with Saudi Arabia, including arms sales, following the OPEC+ decision.

“The Kingdom rejects any dictates,” the Saudi foreign ministry tweeted on Thursday, saying Riyadh was working to “protect the global economy from oil market volatility”.

“The Saudi Foreign Ministry can try to spin or deflect, but the facts are simple,” he said, adding that other nations in the oil cartel told the United States privately they “felt coerced to support Saudi’s direction.”

Despite the testy exchanges, both sides face constraints in how to pressure each other in practice, according to interviews with analysts and experts in the Gulf. Washington will not want to do anything to risk the security of the kingdom’s oil sector, any damage to which would send prices spiralling even higher and possibly drive Riyadh closer to China and Russia.

For its part, Riyadh is aware it cannot easily diversify arms supplies for its military, which has been overwhelmingly equipped and trained by the United States ever since the two countries forged their mutually beneficial relationship in 1945.

Still, the U.S.-Saudi rift is widening as Saudi Crown Prince Mohammed bin Salman, widely known as MbS, flags his country’s — and his own — importance on the world stage.

Ties were already frayed by Biden’s stance on the 2018 murder of Saudi journalist Jamal Khashoggi, the Yemen war and more recently by the U.S. delay, after Prince Mohammed was named prime minister, in granting him status-based immunity in a U.S. lawsuit on the Khashoggi killing.

“The crown prince believes that the U.S. administration has him in its targets and therefore he decided to challenge it and prove the strength of his position within the kingdom and that he does not care about the U.S. stance,” said one Gulf source, requesting anonymity due to the sensitivity of the matter.

“They believe the Americans cannot go far in punishing Saudi Arabia so this is a battle of wills and sovereign decision making,” said the source, adding that the Saudis calculated they could absorb “limited” U.S. retaliation options.

The Saudi government media office did not immediately respond to a Reuters request for comment.

MbS gained some leverage on the world stage after Russia’s Feb. 24 invasion of Ukraine, with Western leaders, including Biden, beating a path to the kingdom asking for more oil in order to combat high inflation and rising borrowing costs.

They all left empty handed.

“MbS is a very proud man,” said Ali Shihabi, a Saudi commentator close to the Royal Court. “The U.S. is definitely a partner MbS wants to keep close and work with, but he will not allow the country to be at the mercy of the whims of US politicians.”

“He has made a great effort since day 1 to signal to the U.S. that he wants excellent ties. But U.S. politicians keep on harping on Khashoggi which he admitted was a horrible mistake 4 years ago.”

Prince Mohammed, the kingdom’s de facto ruler, is aware of Riyadh’s oil market power and position as a counterweight to Iran, and may stand firm in the face of U.S. criticism.

But Riyadh’s Achilles heel is security. It says it faces a threat from Iran and its proxies, especially after 2019 attacks that temporarily hit Saudi oil output and shook energy markets. Riyadh blamed Tehran, which denied responsibility.

Several Saudi officials have publicly stressed that the OPEC+ decision had nothing to do with politics, but was a technical one based on safeguarding oil market stability in the face of global monetary and fiscal tightening.

U.S. State Department spokesperson Ned Price, asked during a briefing on Wednesday about recalibrating the relationship with Riyadh, said that, “certainly, we won’t take our eye off the threat that Iran poses not only to the region but in some ways beyond”.

The most the U.S. can practically do is to halt arms sales to Saudi, said Elisabeth Kendall, a Middle East expert at Girton College, Cambridge.

“The challenge with this is that it is in America’s own strategic and economic interests to continue to supply Saudi so it can protect its oil infrastructure… and avoid (Riyadh) forging ever closer ties with Russia and China”.

Riyadh has pressed Washington to supply it with more Patriot missile batteries and scrap a policy of selling only defensive arms, a limit set by the Biden administration over Yemen’s war.

Jeremy Binnie, Middle East defence specialist at Janes, said the Saudis are most dependent on the United States for air power, both in terms of defensive and offensive capabilities.

Even if the Saudis were prepared to write-off their vast investments in U.S. military equipment, Binnie said, other countries would struggle to provide comparable capabilities, especially that the Russian defence industry is struggling to obtain key technology due to sanctions.

As a result of Khashoggi’s killing by Saudi agents and a crackdown on dissent at home MbS, once lauded as a reformer, became seen in the West as an impulsive and unreliable leader.

MbS, who faces a U.S. lawsuit over Khashoggi’s killing, has denied involvement.

“It is a very difficult situation. There is elections posturing (by Biden) but there is also bitterness (on both sides),” said another Gulf source, who also declined to be named. “But it can be ironed out, it can be eventually finessed.