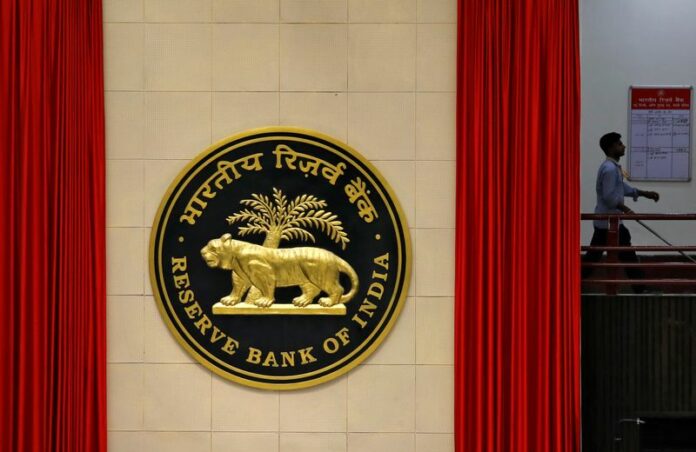 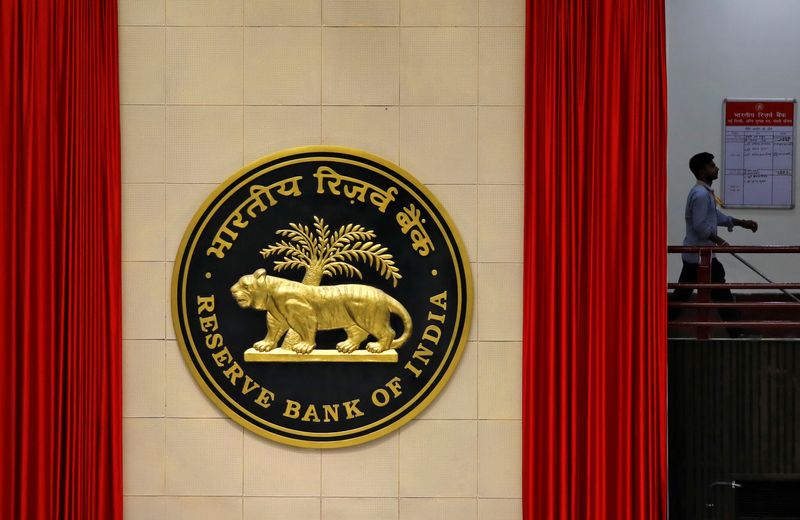 © Reuters. FILE PHOTO: A worker walks past the logo of Reserve Bank of India (RBI) inside its office in New Delhi, India July 8, 2019. REUTERS/Anushree Fadnavis

MUMBAI (Reuters) – The Reserve Bank of India, seeking to arrest the rupee’s slide, is asking local banks to not build additional positions in the non-deliverable forward market, a move that could lead to offshore volatility spilling into local markets, bankers and traders said.

The build-up of positions in this segment of the market is forcing the RBI to spend more reserves to defend the rupee, one of the bankers said.

The RBI’s informal communication to local bankers is a step back from the directions it issued in June 2020, when it allowed banks operating from the International Financial Services Centre Banking Units to trade in the NDF segment.

The central bank’s move in 2020 came after studies showed that the foreign bank-dominated NDF market, over which the RBI had little influence, fuelled volatility and often led the spot rupee lower in times of stress. Letting Indian banks trade in the segment would give RBI more control.

However, increased trading in the segment has created higher demand for dollars at a time when the spot rupee is already under pressure, forcing the RBI to intervene through dollar sales.

The RBI had probably assessed that the NDF was “nullifying the impact of their intervention,” and was increasing liquidity in the forward market, both of which it does not want. Anindya Banerjee, head of research -forex and interest rates at Kotak Securities, said.

Meanwhile, the rupee’s swift decline in recent days had led to arbitrage opportunities between the onshore and offshore rates. The arbitrage increases demand for dollars onshore while providing more liquidity offshore.

For instance, the USD/INR NDF 1-month rate is currently 7 paisa higher than the corresponding onshore rate and the 3-month forward rate is about 25 paisa higher.

About two weeks back, this difference was at near 2 paisa and 8 paisa, respectively.

To take advantage of this arbitrage, eligible banks could buy spot dollars onshore and pay 1-month premium while selling USD/INR 1-month in the NDF market.

“When you arbitrage, you use dollar leverage and that, we think, has become a concern for the RBI,” said Abheek Barua, an economist at HDFC Bank.

“Now that banks are not being allowed, the NDF will start having more of an influence (on the rupee exchange rate),” he said, adding the extent of the influence would depend on the overall RBI intervention.

Bankers argue that the RBI’s curbs on the activity of banks on NDF will not ease pressure on the rupee. Instead, it would lead to offshore rates once again having more influence on the rupee exchange rate.

“The problem is that with banks now told to step aside, the difference between NDF and onshore will persist,” a trader at a foreign bank said.

Bankers told Reuters that the RBI had clamped down on outright activity on the NDF. Trading forward basis points, or the difference between two maturities, is still allowed.

The RBI did not reply to an email seeking comment.