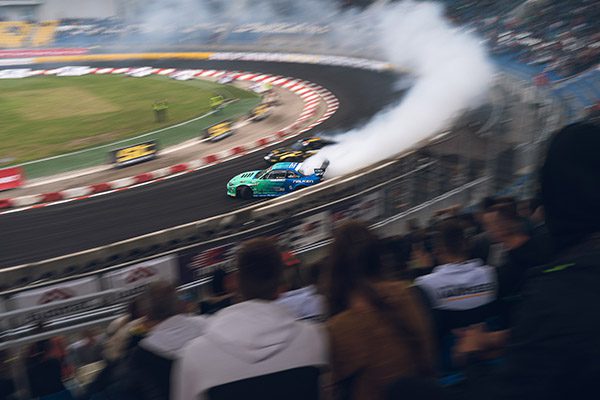 Falken drifter James Deane’s Drift Masters European Championship campaign came to a close recently in Poland, with a podium finish that secured a fourth-place finish in the overall championship standings. The dramatic season finale, held on a custom-built stadium drift circuit at the Moto Arena in Łódź, saw Deane battle hard for his top three finish in extremely challenging conditions.

The stadium layout would present some of the trickiest driving conditions of his career, as dangerous walls mixed with a huge rainstorm during the Top 16 made the track extremely tricky to drive on. Despite this, James battled through some bad luck to make a return to the podium in his Falken-shod S14.9 up against a hotly-contested field of other world-class drifters

During what was a hugely competitive but challenging 2022 season in Drift Masters competition, Deane claimed three podiums in total, with a third place on home soil in Ireland, a second place in Latvia and another podium in the finale in Poland. His eventual points tally would see him miss out on a top three spot in the overall championship standings by just four points.

This year’s DMEC season saw record numbers once again, both in event attendance and livestream views, as Deane remained a headline driver at each round, attracting a large number of fans from around the world in the paddock and the grandstands.

Beyond his season spent competing in the Drift Masters European Championship, Deane enjoyed many other memorable moments during the year. A clear highlight was being invited back to the prestigious Goodwood events to show off his talent behind the wheel. In April, he represented drifting for the first time in front of a brand new audience at the 79th Members’ Meeting on the full Goodwood Motor Circuit in his custom Falken Tyre E92 Eurofighter.

Then in June his Eurofighter was in action once again on the iconic Goodwood Hill Climb at the 2022 Festival of Speed. Over the bumper four-day event hundreds of thousands of motorsport fans and automotive industry experts (along with millions more on the livestream) watched James secure the victory in a timed ‘Driftkhana’ competition measuring speed, skill and driving flair.

In May, James then headed to Germany to be reunited with the extended Falken Tyres motorsport family at the world-famous Nürburgring 24 Hours, where Falken competes on the gruelling Nordschleife as Porsche GT3 customer team. There Deane starred in the annual Falken Drift Show held ahead of the 24 hours, putting on an exciting drift demonstration for the 250,000+ hardcore fans trackside.

Later on in the year, Deane would also appear again on home soil at Mondello Park for the inaugural LZ Festival. Alongside YouTube and social media stars from around the world, Deane spent time meeting fans before emerging victorious in the Top 32 drift competition which saw some of Europe’s best drifters and YouTube automotive celebrities compete.

This year also saw Deane make a return to mainstream automotive media, as part of a feature video from BBC’s Top Gear Magazine. Reaching some 8.5 million YouTube subscribers, Deane was tasked with teaching journalist Ollie Marriage how to drift his Falken Tyres E92 Eurofighter around both Dunsfold Test Track and Mondello Park.

Before the focus shifts to the 2023 season, Deane has one more major trip to embark on, as he will return to the USA to take part in Drift Week 6. Over a two-week period the Drift Week team will travel to various circuits based around the Texas area.

Looking ahead Deane’s ambitious plans for 2023 are beginning to take shape. The rebuild has already begun on the S14.9 to bring it back stronger and better than ever ready for next year.