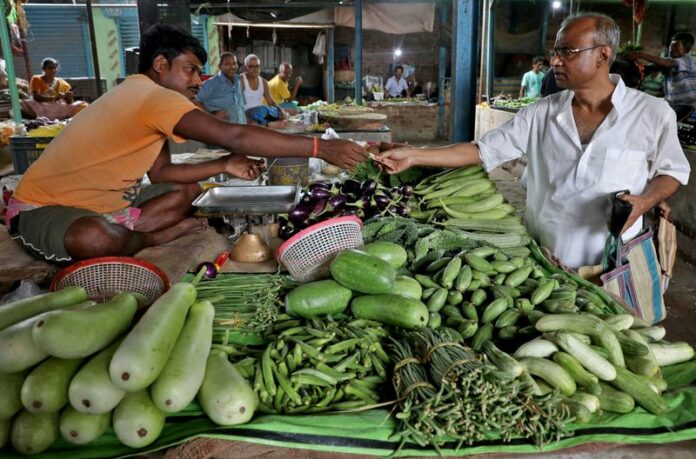 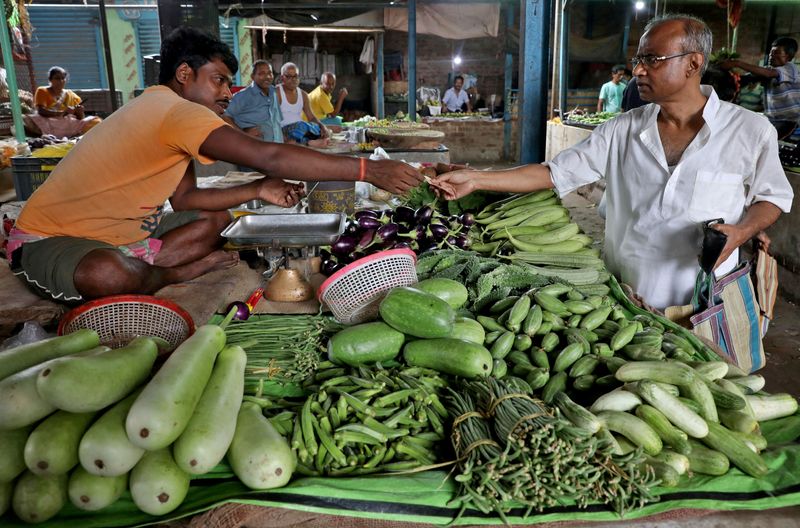 © Reuters. FILE PHOTO: Nikhil Kumar Mondal, 65, a retired school headmaster, buys vegetables from a vendor at a market on the outskirts of Kolkata, India, May 20, 2022. Picture taken May 20, 2022. REUTERS/Rupak De Chowdhuri/File Photo

BENGALURU (Reuters) – India’s retail inflation accelerated to a five month high of 7.30% in September due to surging food prices, staying well above the Reserve Bank of India’s (RBI) upper tolerance band for a ninth month, a Reuters poll found.

Fueled by erratic rainfall and supply shocks from Russia’s invasion of Ukraine, prices of daily consumables like cereals and vegetables which form the largest category in the inflation basket have climbed over the past two years.

Already reeling from COVID-19 pandemic-induced economic shocks, India’s poor and middle classes will be further hit by the increases as they spend a large chunk of income on food.

The Oct. 3-7 Reuters poll of 47 economists suggested inflation – as measured by the Consumer Price Index – rose to an annual 7.30% in September from 7.00% the previous month. If realised, that would be the highest since May 2022.

“There is a strong pressure from food that is playing out,” said Dharmakirti Joshi, chief economist at Crisil.

The Indian government has introduced measures to calm local prices, including some export restrictions on rice to temper inflation. But consumer prices have remained defiant and stayed above the RBI’s upper tolerance limit this year.

A weakening currency is also not helping. The battered Indian rupee hit a new low of 82.32/$ on Friday and was expected to remain under pressure over the next six months, a separate Reuters poll of FX analysts showed.

That is likely to pressure the RBI, which has raised its key repo rate by 190 basis points in four moves this year, to intensify its interest rates hikes.

“Against a more hostile global backdrop and a stickier inflation trajectory at home, we now expect a terminal rate of 6.75% – previously 6.25% – in this cycle,” said Sajjid Chinoy, chief India economist at J.P. Morgan.

“To the extent the rupee weakens, there will be passthrough effects to the CPI trajectory.”

(This Oct. 10 story has been corrected to fix quote from Dharmakirti Joshi to remove word unprecedented)