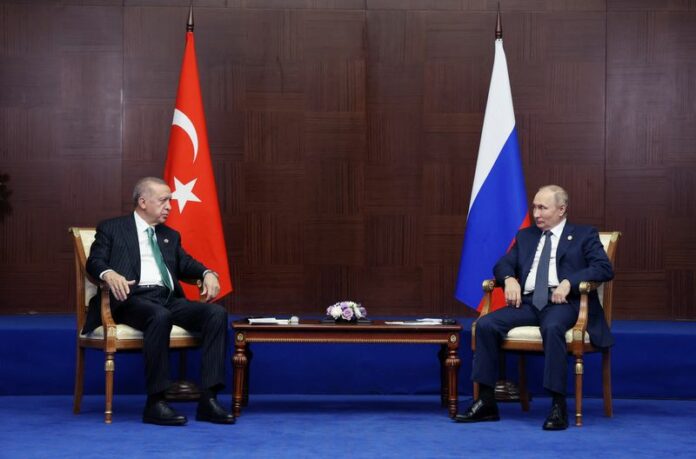 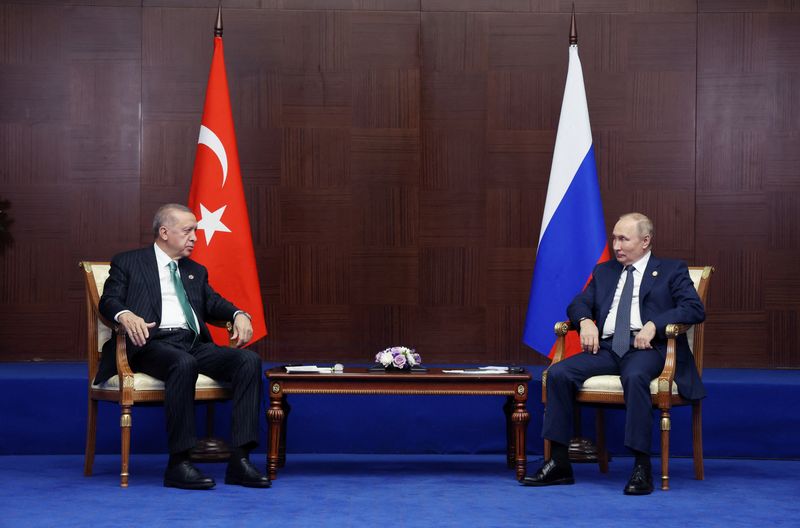 © Reuters. Russia’s President Vladimir Putin and Turkey’s President Tayyip Erdogan meet on the sidelines of the 6th summit of the Conference on Interaction and Confidence-building Measures in Asia (CICA), in Astana, Kazakhstan October 13, 2022. Sputnik/Vyacheslav

ASTANA (Reuters) -Russian President Vladimir Putin proposed to his Turkish counterpart Tayyip Erdogan on Thursday that Moscow could export more gas via Turkey and turn it into a new supply “hub”, bidding to preserve Russia’s energy leverage over Europe.

At a meeting in Kazakhstan, Putin said Turkey offered the most reliable route to deliver gas to the European Union, and the proposed platform would allow prices to be set without politics.

Russia is looking to redirect supplies away from the Nord Stream Baltic gas pipelines, damaged in explosions last month that are still under investigation. Russia blamed the West, without providing evidence, and rejected what it called “stupid” assertions that it had sabotaged the pipelines itself.

Putin told Erdogan the hub would be “a platform not only for supplies, but also for determining the price, because this is a very important issue”.

“Today, these prices are sky-high,” he said. “We could easily regulate (them) at a normal market level, without any political overtones.”

Erdogan did not respond in the televised portion of their meeting, but Kremlin spokesman Dmitry Peskov was quoted by the Russian news agency RIA as saying both men had ordered a rapid and detailed examination of the idea.

Russia supplied about 40% of Europe’s gas before its Feb. 24 invasion of Ukraine but had cut flows sharply even before the explosions, blaming technical problems that it said were the result of Western sanctions.

Relations with NATO member Turkey are vital to Russia at a time when the West has hit it with waves of economic sanctions, which Ankara has refrained from joining. Turkey has, however, rejected Russia’s move to annex four Ukrainian regions as a “grave violation” of international law.

Erdogan has sought to mediate between Moscow and Kyiv, and achieved a rare breakthrough in July when, together with the United Nations, he brokered an agreement allowing for the resumption of commercial Ukrainian grain exports from Black Sea ports that Russia had blockaded.

Russia has complained, however, that its own grain and fertiliser exports, while not directly targeted by Western sanctions, continue to be hampered by problems with access to foreign ports and obtaining insurance.

Erdogan told Putin: “We are determined to strengthen and continue the grain exports … and the transfer of Russian grain and fertiliser to less developed countries via Turkey.”

Russian officials had said before the meeting that they were open to hearing proposals from Turkey about hosting peace talks involving Russia and the West.

However, Peskov was quoted by RIA as saying “the topic of a Russian-Ukrainian settlement was not discussed” by the leaders.

Ukrainian President Volodymyr Zelenskiy has ruled out talking to Putin after he proclaimed the annexation of the four Ukrainian regions and after Russia rained missiles on Ukrainian cities this week in the wake of an attack on a vital bridge between Russia and Crimea, the peninsula it seized in 2014.