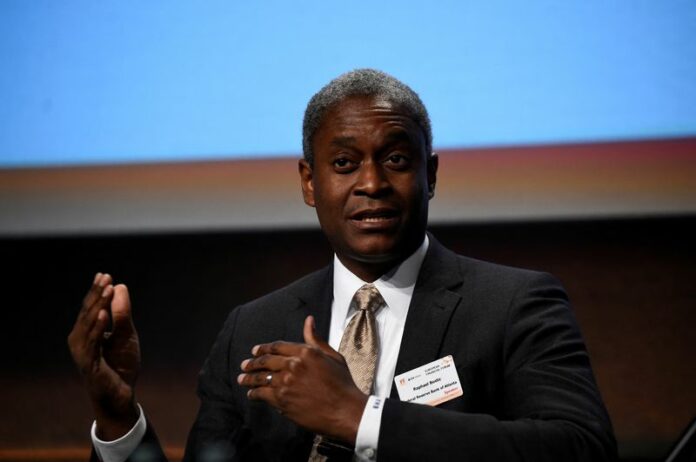 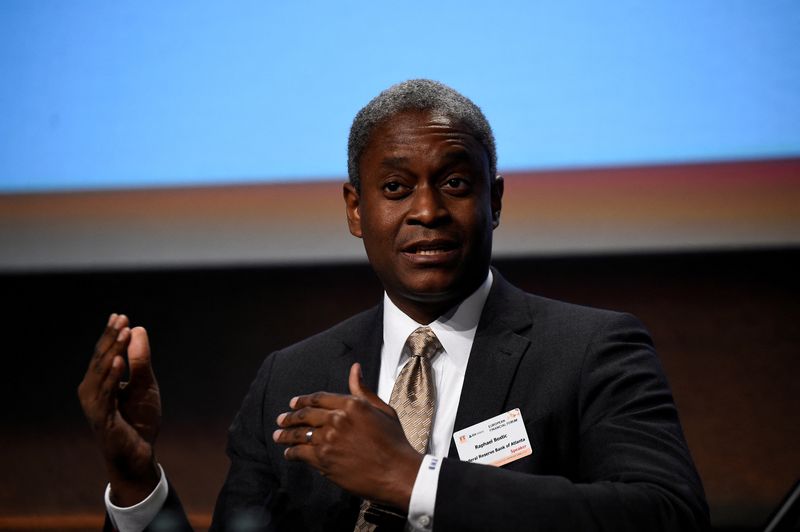 NEW YORK (Reuters) -Atlanta Federal Reserve President Raphael Bostic on Friday said that over the last few years some of his personal investing activity inadvertently happened in periods where it was forbidden by U.S. central bank ethics rules at the time.

Bostic explained in a note that accompanied revised financial disclosure forms going back to the start of his tenure as Atlanta Fed president in 2017 that trades violating the ethics code were made by financial advisors and were not done under his direction.

“Since I assumed office, I have ensured that my assets were held in managed accounts that neither I nor my personal investment adviser had the ability to direct,” Bostic wrote.

“Due to my reliance on a third-party manager, I was unaware of any specific trades or their timing, including a limited number that took place during Federal Open Market Committee … blackout periods or financial stress periods,” Bostic wrote. “Similarly, I was unaware of when my holdings of U.S. Treasury funds in 2021 exceeded the limits set forth by the FOMC’s trading and investing rules.”

“At no time did I knowingly authorize or complete a financial transaction based on nonpublic information or with any intent to conceal or sidestep my obligations of transparent and accountable reporting,” Bostic said, adding that he sincerely regretted if his actions had raised questions about his or the Fed’s standards and behavior.

Under the rules then in place, Fed officials were prohibited from owning stocks in banks overseen by the central bank. They were also prohibited from trading during the so-called blackout periods around the meetings of the Fed’s policy-setting FOMC, when officials are not supposed to speak publicly on economic or monetary policy issues.

The rules also told Fed policymakers and senior staff to avoid engaging in investments that would create the appearance of a conflict of interest. Fed ethics rules are designed to ensure that officials who set the central bank’s policy are not profiting off their decisions and knowledge.

In the revised disclosure form for 2020, Bostic noted a number of sales of various investment funds that happened in the days leading up to a key announcement by Fed Chair Jerome Powell on Feb. 28 of that year that indicated the central bank was about to act as the global economy was slammed by the shock of the coronavirus pandemic. Amid high volatility in financial markets, in short order the Fed slashed interest rates and started buying massive amounts of bonds, while launching emergency lending programs to help shore up financial markets.

In his statement, Bostic said he thought he was complying with the rules as they stood then and had communicated to those managing his money about blackout trading restrictions. He said that once he understood there were problems with his disclosures he acted quickly to address them.

Bostic’s revised financial statements are the latest development in a broader controversy facing the central bank. Just over a year ago, the leaders of the Dallas and Boston Fed banks resigned after their financial disclosure forms showed both had been actively trading in financial markets while also helping to set monetary policy.

Robert Kaplan, who was then the leader of the Dallas Fed, had reported trading millions of dollars in stocks and other investments since taking over as head of that regional bank. Eric Rosengren, who had led the Boston Fed since 2007, reported more modest trades. At the start of this year, Richard Clarida, who was then second-in-command of the central bank, resigned from his position early amid questions about his trading in 2020.

Earlier this year, the Fed imposed a much more stringent code limiting what officials and senior staff can invest in, while also requiring pre-approval of trades. It extended the new ethics restrictions to family members of central bank leaders and senior staff.

In his statement on Friday, Bostic said that as soon as he realized his financial activities strayed beyond what the rules allowed, he brought it to the attention of the Atlanta Fed’s board of directors and top lawyer, as well as the U.S. central bank.

It is unclear when Bostic recognized his disclosure information was incorrect. With the first news of the trading issues at the Fed coming in September 2021, Bostic wrote “only in recent months did I learn that the approach I was taking for managing my assets generated several issues.”

A Fed spokesperson said in a statement that Fed Chair Jerome Powell “has asked the Office of Inspector General for the Federal Reserve Board (of Governors) to initiate an independent review of President Bostic’s financial disclosures.”

“We look forward to the results of their work and will accept and take appropriate actions based on their findings,” the Fed spokesperson said.

A spokesman for the Inspector General said “we are aware of the matter and will conduct an independent and comprehensive investigation. We have no further comment at this time.”

Bostic’s investing issues echoed those of Powell. In July, a report from the central bank’s Inspector General identified that he also had some trades that happened during blackout periods in 2020.

The Inspector General cleared Powell and Clarida of wrongdoing, but said an investigation of regional Fed trading activity is ongoing.

Of the 12 regional Fed banks, 11 reported 2021 financial disclosures for their respective leaders in June. Bostic had an extension for the release of his disclosure forms.