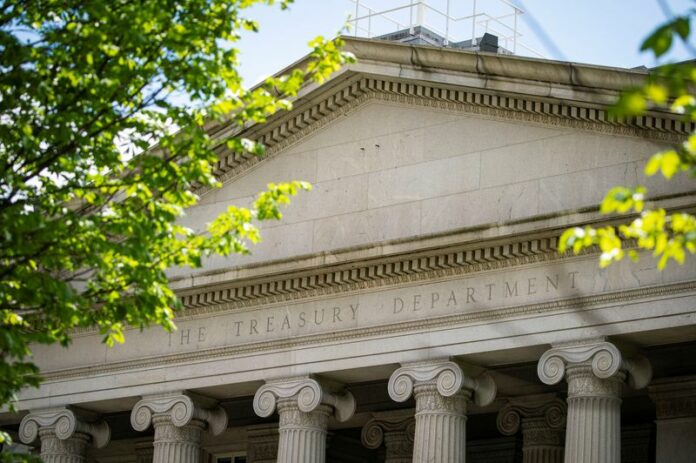 U.S. Treasury asks major banks if it should buy back bonds

By Karen Brettell and Davide Barbuscia

(Reuters) -The U.S. Treasury Department is asking primary dealers of U.S. Treasuries whether the government should buy back some of its bonds to improve liquidity in the $24 trillion market.

Liquidity in the world’s largest bond market has deteriorated this year partly because of rising volatility as the Federal Reserve rapidly raises interest rates to bring down inflation.

The central bank, which had bought government bonds during the COVID-19 pandemic to stimulate the economy, is now also reducing the size of its balance sheet by letting its bonds reach maturity without buying more, a move which investors fear could exacerbate price swings.

The Treasuries market has swelled from $5 trillion in 2007 and $17 trillion in early 2020, while banks are facing more regulatory constraints that they say make it more difficult to intermediate trades.

The Treasury is asking dealers about the specifics of how buybacks could work “in order to better assess the merits and limitations of implementing a buyback program.”

These include how much it would need to buy in so-called off-the-run Treasuries, which are older and less liquid issues, in order to “meaningfully” improve liquidity in these securities.

The Treasury is also querying whether reduced volatility in the issuance of Treasury bills as a result of buybacks made for cash and maturity management purposes could be a “meaningful benefit for Treasury or investors.”

It is further asking about the costs and benefits of funding repurchases of older debt with increased issuance of so-called on-the-run securities, which are the most liquid and current issue.

“The Treasury is acknowledging the decline in liquidity and they’re hearing what the street has been saying,” said Calvin Norris, portfolio manager & US rates strategist at Aegon (NYSE:AEG) Asset Management. “I think they’re investigating whether some of these measures could help to improve the situation.”

He said buying back off-the-run Treasuries could potentially increase liquidity of outstanding issues and buyback mechanisms could help contain price swings for Treasury bills, which are short-term securities.

However, when it comes to longer-dated government bonds, investors have noted that a major constraint for liquidity is the result of a rule introduced by the Federal Reserve following the 2008 financial crisis which requires dealers to hold capital against Treasuries, limiting their ability to take on risk, particularly at times of high volatility.

“The underlying cause of the lack of liquidity is that banks – due to their supplementary leverage ratios being capped – don’t have the ability to take on more Treasuries. I view that as the most significant issue right now,” said Norris.

The Treasury Borrowing Advisory Committee, a group of banks and investors that advise the government on its funding, has said that Treasury buybacks could enhance market liquidity and dampen swings in Treasury bill issuance and cash balances.

It added, however, that the need to finance buybacks with increased issuance of new securities could increase yields and be at odds with the Treasury’s strategy of predictable debt management if the repurchases were too variable in size or timing.

The Treasury is posing the questions as part of its regular survey of dealers before each of its quarterly refunding announcements.