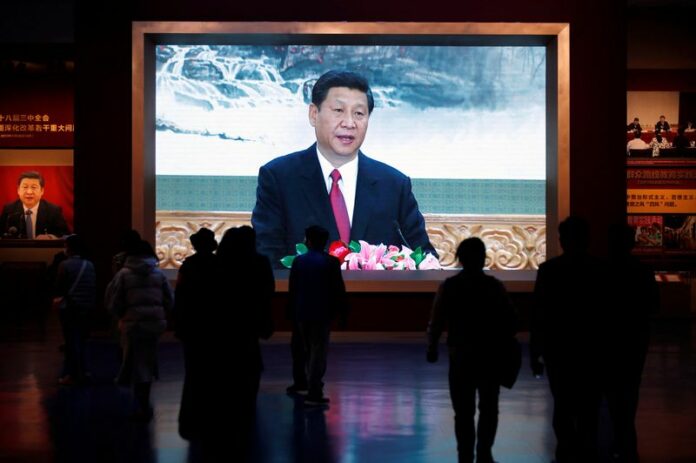 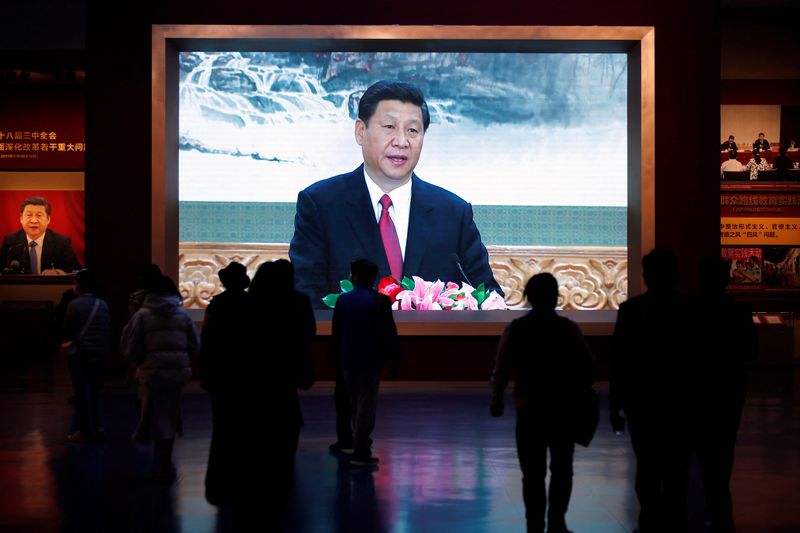 BEIJING (Reuters) -President Xi Jinping on Sunday touted the ruling Communist Party’s fight against COVID-19 while reiterating support for the private sector and allowing markets to play a key role even as China fine-tunes a “socialist economic system”.

During a speech at the start of a congress where he is widely expected to win a third leadership term that cements his place as the country’s most powerful ruler since Mao Zedong, Xi also lauded the party’s taking control of the situation in Hong Kong, which was rocked by anti-government protests in 2019.

The twice-a-decade gathering of roughly 2,300 delegates from around the country began in the vast Great Hall of the People on the west side of Tiananmen Square amid tight security and under blue skies after several smoggy days in the Chinese capital.

On Taiwan, Xi said, “We have resolutely waged a major struggle against separatism and interference, demonstrating our strong determination and ability to safeguard state sovereignty and territorial integrity and oppose Taiwan independence.”

Xi said the party of 96 million members “has won the largest battle against poverty in human history.”

In his decade in power, Xi, 69 has set China on an increasingly authoritarian path that has prioritised security, state control of the economy in the name of “common prosperity”, a more assertive diplomacy, a stronger military and intensifying pressure to seize democratically governed Taiwan.

Analysts generally do not expect any significant change in policy direction.

“We must build a high-level socialist market economic system … unswervingly consolidate and develop the public ownership system, unswervingly encourage and support the development of the private economy, give full play to the decisive role of the market in the allocation of resources, and give better play to the role of the government,” he said.

In recent days, Beijing has repeatedly emphasised its commitment to Xi’s zero-COVID strategy, dashing hopes among countless Chinese citizens as well as investors that Beijing might begin exiting anytime soon a policy that has caused widespread frustration and economic damage.

Xi’s power appears undiminished by the tumult of a year that has seen China’s economy slow dramatically, dragged down by the COVID policy’s frequent lockdowns, a crisis in the property sector and the impact of his 2021 crackdown on the once-freewheeling “platform economy”, as well as global headwinds.

China’s relations with the West have deteriorated sharply, worsened by Xi’s support of Russia’s Vladimir Putin.

The son of a Communist Party revolutionary, Xi has reinvigorated a party that had grown deeply corrupt and increasingly irrelevant, expanding its presence across all aspects of China, with Xi officially its “core”.

Xi did away with presidential term limits in 2018, clearing the way for him to break with the precedent of recent decades and rule for a third five-year term, or longer.

The congress is expected to reconfirm Xi as party general secretary, China’s most powerful post, as well as chairman of the Central Military Commission. Xi’s presidency is up for renewal in March at the annual session of China’s parliament.

In the run-up to the congress, the Chinese capital stepped up security and COVID curbs, while steel mills in nearby Hebei province were instructed to cut back on operations to improve air quality, an industry source said.

The day after the congress ends on Saturday, Xi is expected to introduce his new Politburo Standing Committee, a seven-person leadership team. It will include the person who will replace Li Keqiang as premier when Li steps down from that post in March after serving the maximum two terms.

India Spices: Coriander, turmeric up; jeera down on profit booking