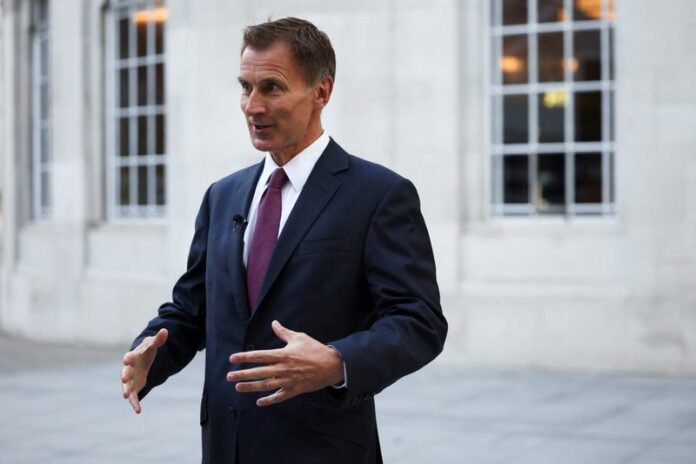 LONDON (Reuters) – Britain’s new finance minister Jeremy Hunt said the government had gone “too far, too fast” in its drive for growth after Prime Minister Liz Truss was forced to fire his predecessor and make U-turns on tax-cutting plans amid market turmoil.

Truss appointed Hunt on Friday to replace Kwasi Kwarteng, and said she was scrapping parts of their controversial economic package announced only three weeks earlier, which included billions of pounds of unfunded tax cuts.

“My focus is on growth underpinned by stability. The drive on growing the economy is right – it means more people can get good jobs, new businesses can thrive and we can secure world class public services,” Hunt said late on Saturday.

“But we went too far, too fast,” he added in the statement.

Hunt is trying to reassure the financial markets after Kwarteng’s “mini-budget” on Sept. 23 led to a slump in the value of the pound and government bonds, forcing the Bank of England (BoE) to step in to restore calm.

BoE Governor Andrew Bailey said earlier that he had spoken to Hunt and there had been an immediate “meeting of minds” on the need to fix the public finances.

Hunt said the government needed to be honest with the public about difficult decisions that were needed on tax and spending, but these would be taken with a view to protecting struggling families and businesses.

“I will set out clear and robust plans to make sure government spending is as efficient as possible, ensure taxpayer money is well spent and that we have rigorous control over our public finances,” he said.

The key test of whether Hunt has reassured the markets will come on Monday, when the British government bond market functions for the first time without the emergency buying support provided by the BoE since Sept. 28.

Gilt prices plunged late on Friday after Truss gave a news conference in which she announced the partial reversal of her tax-cutting agenda, with some strategists saying more was needed to shore up the appeal of government bonds to investors.