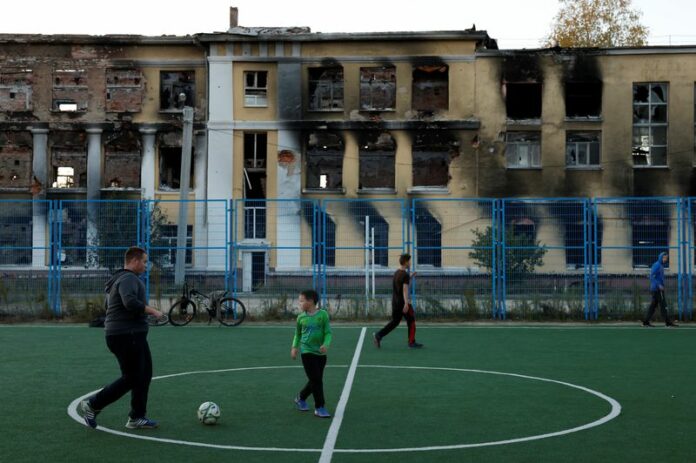 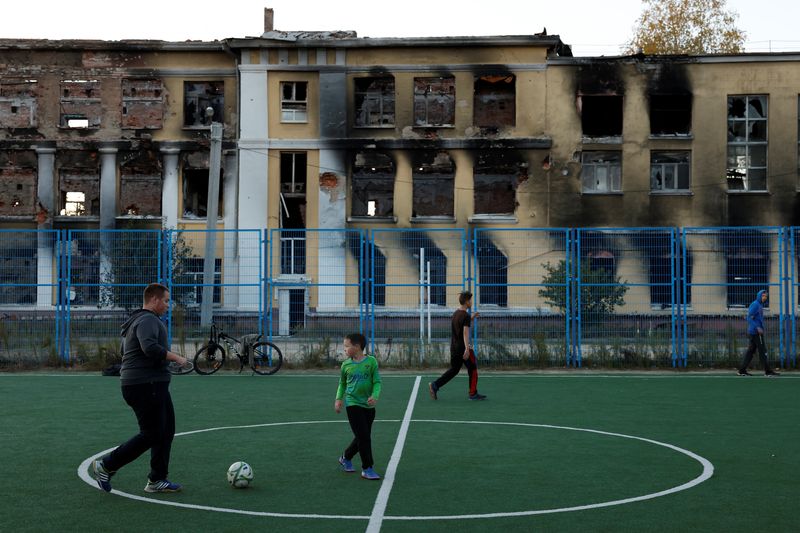 © Reuters. Friends play football in the playground of the School No. 134 that was destroyed by Russian military strikes, as Russia’s attack on Ukraine continues, in Kharkiv, Ukraine, October 14, 2022. REUTERS/Clodagh Kilcoyne

WASHINGTON (Reuters) – Russia’s attacks on civilian infrastructure in Ukrainian cities away from the front lines will complicate the dire economic situation facing the country, which has already seen a tenfold increase in poverty this year, a top World Bank official said on Saturday.

“If this continues, the outlook is going to be much, much harder,” he told Reuters in an interview. “As winter really starts biting … certainly by December or January, and if the houses are not repaired … there may be another internal wave of migration, of internally displaced persons.Ukrainian President Volodymyr Zelenskiy this week told international donors that Ukraine needed about $55 billion – $38 billion to cover next year’s estimated budget deficit, and another $17 billion to start to rebuild critical infrastructure, including schools, housing and energy facilities.

Ukrainian officials have stressed that they need ongoing and predictable financial assistance to keep the government running, while also beginning critical repairs and reconstruction.

The response to Zelenskiy’s call – delivered during the annual meetings of the International Monetary Fund and World Bank – and many other meetings held over the past week was encouraging, Banerji told Reuters in an interview.

“Most countries indicated that they would be supporting Ukraine financially over the next year, and so that is a very positive outcome,” he said. Twenty-five percent of the population would be living in poverty by year-end, up from just over 2% before the war, he said, and the number could rise to as high as 55% by the end of next year.

Unanimous selection of Ukrainian Finance Minister Serhiy Marchenko as the next rotating chair of the boards of governors of both institutions in 2023 was also a testament of strong ongoing support for the war-torn country, Banerji said.

IMF Managing Director Kristalina Georgieva this week said Ukraine’s international partners had already committed $35 billion in grant and loan financing for Ukraine in 2022, but its financing needs would remain “very large” in 2023.

IMF staff will meet with Ukrainian authorities in Vienna next week to discuss Ukraine’s budget plans and a new IMF monitoring instrument, which should pave the way for a full-fledged IMF program once conditions allow,” Georgieva said.

Banerji said Ukraine had already pared its budget plans back to a bare minimum, with funds going to fund salaries and pensions, military expenses and servicing domestic debt.

The budget included just $700 million for capital expenditures, a tiny fraction of the $349 billion in reconstruction costs recently estimated by the World Bank.

If Ukraine failed to get sufficient support, it would either have to print more money at a time when inflation was already in the low 20-percent range, or further cut social spending, he said.