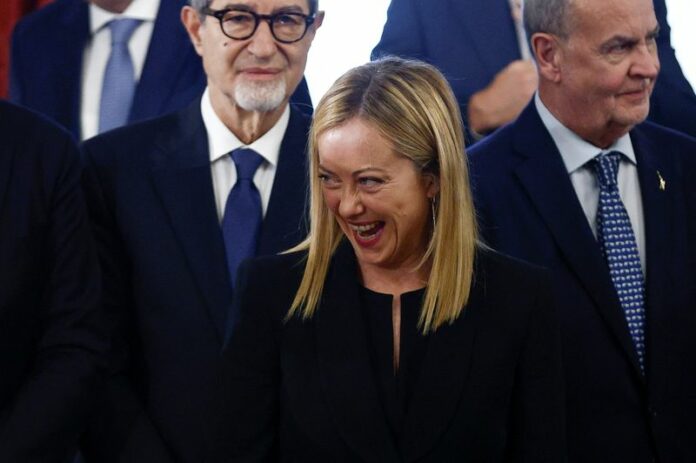 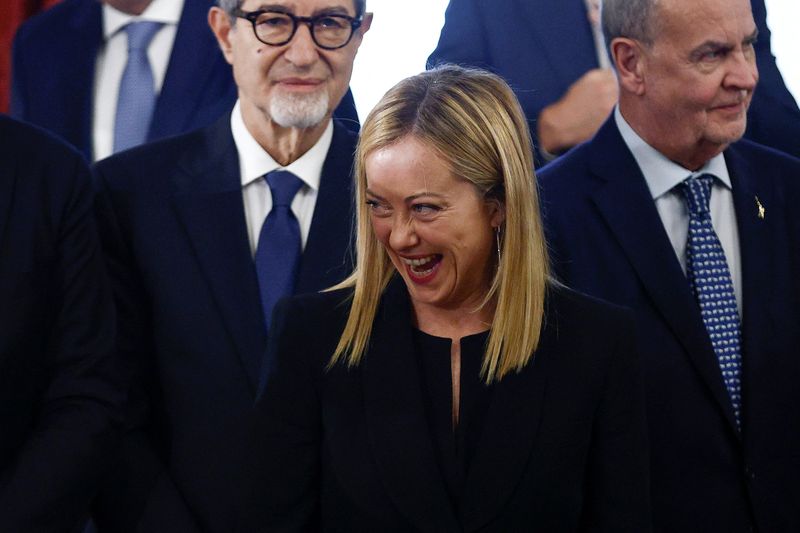 By Crispian Balmer and Angelo Amante

ROME (Reuters) -Giorgia Meloni was sworn in as Italy’s first woman prime minister on Saturday alongside her cabinet team, giving the country its most right-wing government since World War Two.

She takes office at an especially fraught moment, with Italy’s debt-laden economy once again heading into recession, firms buckling under the weight of soaring energy bills, and splits within her coalition over the war in Ukraine.

Standing beneath the crystal chandeliers of a frescoed chamber in the presidential palace, Meloni took her oath of office as her 6-year-old daughter looked on.

Head of the nationalist Brothers of Italy, Meloni swept to victory in an election last month as part of a coalition that included Forza Italia, led by former Prime Minister Silvio Berlusconi, and Matteo Salvini’s anti-immigrant League.

Her government, the 12th this century, replaces a national unity administration piloted by former European Central Bank chief Mario Draghi, who was at the forefront of European Union efforts to sanction Russia after it invaded Ukraine in February.

While Meloni has pledged support for Ukraine, Berlusconi has repeatedly undercut her, earlier this week blaming Kyiv for the war and revealing he had exchanged gifts and “sweet letters” with his old friend, Russian President Vladimir Putin.

After days of often tense talks, Meloni unveiled her team on Friday, giving five ministries each to the League and Forza Italia and reserving nine cabinet posts for her own party.

Technocrats make up the rest of the 24-strong squad, which includes just six women and where the average age is 60.

Italy’s perennially weak economy and ballooning national debt were entrusted to Giancarlo Giorgetti, seen as a moderate member of the League. The Foreign Ministry was handed to Forza Italia veteran Antonio Tajani, seen as a pro-European dove.

Tajani told a local television channel his first act would be to call his Ukrainian counterpart to assure him of Italy’s continued solidarity.

Meloni’s party has neo-fascist roots, but she sought to project a moderate image during the election campaign, dropping previous anti-EU rhetoric and pledging to keep Italy at the heart of European and Western institutions.

European Commission leaders in Brussels sent her messages of congratulations on Saturday.

“I count on and look forward to constructive cooperation with the new government on the challenges we face together,” Commission President Ursula von der Leyen wrote on Twitter.

Meloni also received plaudits from Europe’s nationalist conservatives, who hope her government will prove a powerful ally in their regular battles with Brussels.

“Congratulations Giorgia Meloni on the formation of your government! Big day for the European Right!” Hungarian Prime Minister Viktor Orban wrote on Twitter.

Meloni is due to hold her first cabinet meeting on Sunday following a formal handover of power with Draghi.

She will then will face obligatory confidence votes in parliament during the week that she will easily win given her comfortable majority.