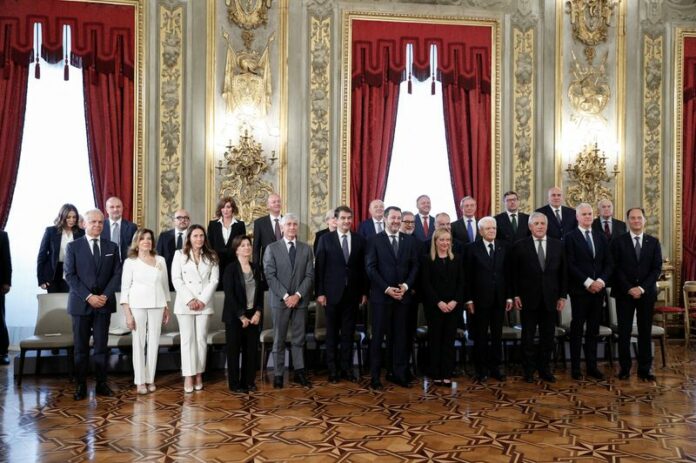 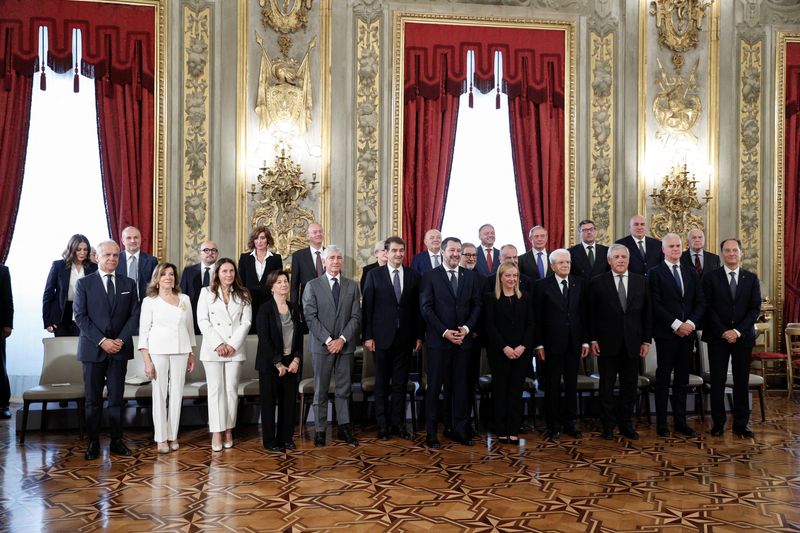 ROME (Reuters) – Italian Prime Minister Giorgia Meloni’s government was sworn into office on Saturday. Her cabinet was made up of 24 ministers. Here the profiles of some of the key figures:

Giancarlo Giorgetti, 55, is a veteran politicalwheeler-dealer viewed as a moderate and relatively pro-Europeanmember of his right-wing League party.

Prior to that he spent most of his 26 years in parliamentbehind the scenes, negotiating on others’ behalf and makinginfluential friends in finance and business.

He was not Prime Minister Meloni’s first choice for the job.She had wanted a technocrat and sources say she approached European Central Bank board member Fabio Panetta, who declinedthe post. She then turned to Giorgetti.

Antonio Tajani, 69, is one of the closest aides to formerPrime Minister Silvio Berlusconi, a safe pair of hands withsolid EU credentials who has been deputy leader of Berlusconi’sconservative Forza Italia party since 2018.

Matteo Piantedosi, 59, is a career civil servant who waschief of staff to League leader Matteo Salvini during his termat the interior ministry in 2018-19, helping him to shape hishard-line policies against illegal immigration.

Although he is close to Salvini, Piantedosi is a technocratwithout party affiliation and has no previous experience as aminister. He has spent the last two years as Rome’s prefect – aposition which upholds security and public order in the capital.

Matteo Salvini, 49, is the head of the hard-right Leagueparty and a former interior minister who has promoted a populistagenda, including mass deportations of boat migrants, sweepingtax cuts and lowering the retirement age.

Bearded and stocky, the plain-speaking Salvini took chargeof the League in 2013 when it was a small, scandal-plaguedregional party. He turned it into a national force and lookedset to dominate Italian politics before a series of missteps sawhis popularity dive over the past three years.

A one-time fervent supporter of Russian President VladimirPutin, Salvini has denied allegations his party was funded byMoscow and has criticised the invasion of Ukraine. He rejected suggestions he should stand down as League leader after its weakshowing in the Sept. 25 election.

Adolfo Urso, 65, from Meloni’s Brothers of Italy party,began his political career in the youth organisation of theItalian Social Movement (MSI), the post-fascist party created in1946 by supporters of dictator Benito Mussolini.

A former journalist, Urso was first elected to parliament in1994. He held posts in centre-right governments led by Berlusconi and recently served as president of the influentialparliamentary intelligence committee.

Guido Crosetto, 59, is a defence industry lobbyist, a closeaide to Meloni and co-founder of her party. He began hispolitical career with the Christian Democratic Party in the1980s and was a long-time member of parliament until 2019 whenhe resigned to become president of AIAD, a federation ofcompanies working in the aerospace and defence sector.

Almost two metres (6.6 feet) tall and bald, he is nicknamed’the gentle giant’ or Shrek, a reference to the cartooncharacter. He served as junior defence minister in a governmentled by Berlusconi between 2008 and 2011.

Gilberto Pichetto Fratin, 68, a Forza Italia senator, is seen as particularly close to Berlusconi. A qualified accountant, he served as deputy industry minister in the Draghi government.

Previously he held numerous positions in his native Piedmont region in northern Italy, including head of the local consumers, commerce and employment committees. He does not appear to have worked before on environmental or energy issues.

Carlo Nordio, 75, a Brothers of Italy lawmaker, iswell-known in Italy as the former prosecutor of Venice, a posthe retired from in 2017. He has called for further measures to speed up trials, saying Italy’s notoriously slow justice system is harming the economy.

He was a fierce opponent of the pool of magistrates that led the so-called “Clean Hands” corruption investigations, which brought down Italy’s political class in the early 1990s, accusing the prosecutors of abusing their powers. Meloni insisted on him for the job, overcoming resistance from Berlusconi who wanted a Forza Italia member in the ministry.