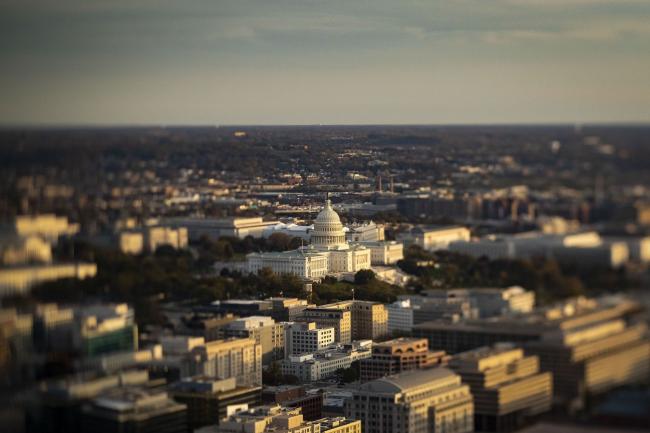 US Budget Gap Plunges to $1.38 Trillion as Pandemic Aid Unwinds

&copy Bloomberg. (EDITORS NOTE: Image was created using a variable planed lens.) The U.S. Capitol is seen in this aerial photograph taken with a tilt-shift lens above Washington, D.C., U.S., on Tuesday, Nov. 4, 2019. Democrats and Republicans are at odds over whether to provide new funding for Trump’s signature border wall, as well as the duration of a stopgap measure. Some lawmakers proposed delaying spending decisions by a few weeks, while others advocated for a funding bill to last though February or March. Photographer: Al Drago/Bloomberg

(Bloomberg) — The US budget deficit saw a record reduction for the 2022 financial year, a second straight annual drop that reflects the drying up of Covid-related aid spending alongside a surge in revenues propelled by wage and employment gains.

The deficit for the fiscal year through September narrowed to $1.38 trillion, from a revised $2.78 trillion the previous year, according to US Treasury Department data released Friday.

The deficit reduction came even after the Treasury accounted for President Joe Biden’s move to forgive a swath of student loans. The department said loan modifications had a $430 billion impact on the month of September, a sharp increase from the $137 billion recognition of such costs in September 2021. The Treasury said that it didn’t anticipate further such large-scale hits to the budget from the loan-forgiveness move in subsequent months.

“Today’s joint budget statement provides further evidence of our historic economic recovery, driven by our vaccination effort and the American Rescue Plan,” Treasury Secretary Janet Yellen and Shalanda Young, director of the Office of Management and Budget, said in a statement, referring to the $1.9 trillion pandemic stimulus package.

Republicans have blasted the American Rescue Plan for fueling the fastest inflation in 40 years, and criticized the student-debt forgiveness as another measure that will add to price pressures.

The budget narrative is poised to shift in the coming year, with a number of costs looming. Rising interest rates mean the Treasury will need to pay out more in debt-servicing costs on the securities it sells to fund spending. Emergency spending for Hurricane Ian also looms.

Former Treasury Secretary Lawrence Summers, a paid contributor to Bloomberg Television, on Friday warned that fiscal debates are likely to be “back on the table” in Washington.

(Updates with further figures and context throughout.)