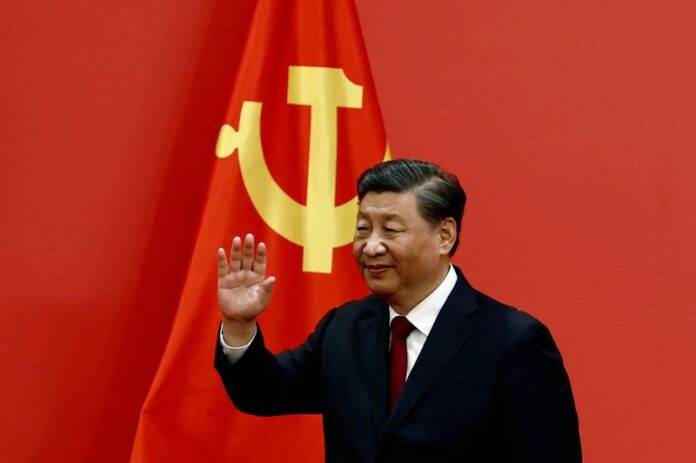 © Reuters. Chinese President Xi Jinping waves after his speech as the new Politburo Standing Committee members meet the media following the 20th National Congress of the Communist Party of China, at the Great Hall of the People in Beijing, China October 23, 2022. RE

Remarkable developments on both fronts over the last 48 hours will be the talk of Asian trading floors on Monday – the former with longer-term economic consequences, and the latter potentially sparking more immediate market fireworks.

In Beijing, China’s Xi Jinping has secured a historic third leadership term, becoming the country’s most powerful ruler since Mao Zedong. His grip on the Communist Party – and the country – appears to be iron.

This was offered up for public consumption on Saturday when former President Hu Jintao was unexpectedly escorted out of the Party Congress’s closing ceremony. Video footage showed Hu, who was sitting next to Xi, looking distressed and confused.

Xi’s cabinet reshuffle may also see central bank chief Yi Gang stepping down and being replaced by former deputy governor Yin Yong, according to sources. “The pro-reform camp is almost out,” says one.

Meanwhile, Japan intervened in the FX market on Friday after the yen slumped to a new 32-year low close to 152.00 per dollar. However many dollars Tokyo sold, it packed a punch – the greenback sank more than 7 yen to low of 144.50 before ending the day around 147.50.

But it remains to be seen whether this turns the yen-selling tide, or whether the FX market reloads and goes again. As long as the U.S.-Japanese monetary policy chasm is in place, traders will feel there is still juice in the long dollar/short yen trade, despite the specter of Japanese intervention.

Although the intervention was a “success”, the dollar around 147.50 yen today is stronger than it was when Tokyo last intervened selling almost $20 billion on Sept. 22. Then, the dollar was just below 147.00 yen.

History suggests this is not over yet.

Key developments that could provide more direction to markets on Monday: