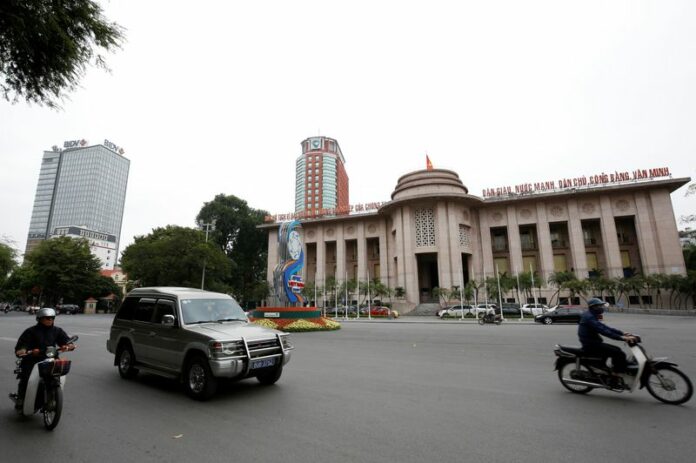 © Reuters. People go past the State Bank building, near the offices of Vietcombank and the Bank for Investment and Development of Vietnam, in central Hanoi, Vietnam November 23, 2017. REUTERS/Kham

By Khanh Vu and Phuong Nguyen

HANOI (Reuters) -Vietnam’s central bank on Monday said it would raise its policy rates by 100 basis points, the second increase in a month, in a move to head off inflation risks, maintain stability and protect its banking system.

Effective Tuesday, the refinancing rate will be increased to 6.0% and the discount rate to 4.5%, the State Bank of Vietnam (SBV) said in a statement.

Like most of its neighbours, Vietnam has faced upward pressure on inflation and has seen its currency take a hit in recent months, with the dong losing 9% against the dollar this year.

The central bank said global inflation remains high and the U.S. Federal Reserve had raised its rates five times recently, with more hikes expected this year and in 2023.

“This, coupled with the strengthening of the dollar, has put pressure on domestic interest rates and exchange rate,” SBV said in the statement late on Monday.

Vietnam’s main stock index earlier on Monday hit its lowest level since January 2020 and closed down 3.3%, recovering slightly from a 4.1% fall earlier. The dong slumped to a fresh record low for a 13th consecutive session in earlier trade.

The SBV said it would closely monitor local and overseas markets “to timely manage” measures and monetary tools.

It said it was willing to intervene in monetary and foreign currency markets “to meet financial institutions’ liquidity needs”.

Market analysts had earlier said faster-than-expected gross domestic product growth for this year has offered the central bank some room to raise its policy rates.

Consumer prices in September rose 4.01% from the end of last year, close to the targeted 4.0% for the year.

The central bank on Oct. 17 widened the exchange rate trading band to 5.0% from 3.0%, following a sharp fall in the dong currency resulting from fluctuations in the global market.

Can Van Luc, an advisor to the government and an economist at the Bank for Investment and Development of Vietnam, said the rate hike was also “aimed at preventing further erosion of the country’s foreign reserves”, a view shared with several other economists.

Vietnam does not regularly disclose the value of its foreign reserves, which have risen steadily over the past decade, reaching $100 billion by the end of last year, an SBV deputy governor said.

The SBV has recently been forced to sell dollars to the market to support the dong currency. Some market analysts estimate about $20 billion has been sold this year.