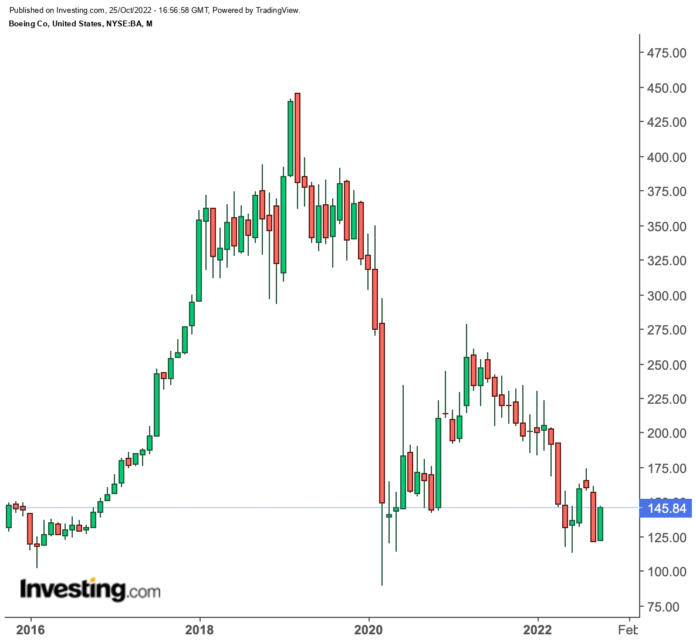 Boeing is on track to post positive cash flows for the first time since 2018
The planemaker is succeeding in clearing up hundreds of already-built aircraft
However, the simmering U.S.-China political rivalry poses significant risks for BA’s stock

Boeing (NYSE:BA) may have rare positive news for its investors upon releasing its latest quarterly earnings tomorrow. The aerospace and defense giant is on track to post yearly positive cash flows for the first time since 2018 after enduring multiple crises.

If that happens, it will signal the company is succeeding in clearing up hundreds of already-built aircraft—a critical step to repair its debt-laden balance sheet and improve liquidity.

Cash remains Boeing’s most important metric after the company accumulated about $60 billion of debt to deal with the global grounding of its flagship 737 MAX aircraft after two fatal crashes.

To make matters worse, a year later, airlines also stopped buying Boeing’s 787 Dreamliners after discovering a series of manufacturing flaws that drew increased scrutiny by its own engineers and regulators at the Federal Aviation Administration.

But the turnaround on the company’s cash-flow situation isn’t something that will materially improve the investment appeal for BA stock, which has traded in a bearish trend since early 2019. The stock declined close to 28% this year. On top of the challenges cited above, the Virginia-based Boeing has been caught up in the simmering U.S.-China political rivalry, which will continue to keep its stock depressed, in my view.

The latest sign that BA is perhaps the biggest casualty of this new geopolitical landscape emerged during the past three months when Chinese airlines completely switched to Airbus for their new orders.

Boeing missed out on a 40-plane deal in September, following an even bigger hit in July, when China ordered nearly 300 Airbus aircraft worth about $37 billion at sticker prices.

China also remains the only primary global jurisdiction that has yet to allow Boeing’s 737 Max to start flying again. The Asian country accounted for $14 billion, or 14% of total sales for Boeing in 2018, and roughly 30% of new orders between 2014 to 2017.

Boeing, while commenting on this tricky situation, said in a statement in July:

“As a top U.S. exporter with a 50-year relationship with China’s aviation industry, it is disappointing that geopolitical differences continue to constrain U.S. aircraft exports.

We continue to urge a productive dialogue between the governments given the mutual economic benefits of a thriving aviation industry.”

Given this backdrop, BA stock is lagging behind its competitor Airbus Group (EPA:AIR). According to InvestingPro models, that underperformance may continue even if the company shows some improvement in its cash positions. These models forecast BA’s fair value at around $131 a share, a further 10% downside. Boeing is also facing difficulties generating profit from its defense business due to escalating costs and supply-chain snarls. Those pressures, combined with high inflation, have contributed to losses on fixed-price military contracts that the company won by bidding near its costs last decade. Earnings from operations at Boeing’s defense and space division tumbled 93% in the second quarter.

These challenges make BA a high-risk-reward bet that could reward patient investors over the long run. Boeing’s position at the center of global air travel suggests that it will gradually overcome its financial difficulties as it works to reduce its order backlog and restore confidence in its aircraft.

That said, the U.S.-China rivalry poses a significant challenge and could keep the planemaker out of its second-largest market for a long time.